Thanks to two public Czech holidays, Jeff’s school decided to close for the week. As I barely had anything going on myself for the first two days, we decided to spend Saturday-Tuesday travelling a little. I’d never been to Germany before, so we decided to visit Munich.

Munich is about 5 hours from Prague, and we took a Eurolines bus. It cost something like 450Kc (£15) each way, which wasn’t bad. The bus had screens down the aisle, which played a couple of films, and gave us a bottle of water and a snack. I’m becoming quite a fan of these buses, although it still doesn’t beat the Student Agency trip to Vienna, where you get screens in front of every seat with films/TV shows/music/games.

We wanted to save money, so we used Couchsurfing to find a host. We’ve actually hosted a lot of people here in Prague already, but this was our first time actually surfing. It takes a while to find a host – around 10 messages! – but eventually we found a cool guy who was willing to host us. His place was easy to find, the couch comfortable, and he even made us traditional Bavarian breakfast (sausages, pretzels and beer!).

Munich is a nice, if expensive, city. Actually, it is the most expensive city in Germany, charging 3.70Euro for a 0.5l beer, around 10 for a meal and 5 for a daily transport pass. We thought that 100Euro would be enough to last us for those few days, but we burnt through it pretty quickly just from eating at what seemed like average restaurants. Of course, as we were near the centre, we were probably ripped off a little.

We took the metro to Karlsplatz and walked into the 30C sunshine, already thirsting for a beer. After pushing through crowds for about fifteen minutes, every restaurant and pub’s outside tables chock-full, we walked a little further right from the Glockenspiel than you an see in this picture and found a few empty tables. Expecting the space to be due to high prices, we checked the menu only to find some of the more reasonable prices we’d seen that day. One of the things that Germany does well is weissbier – wheat beer. If you ever drink with me, you’ll know that wheat beer is quite a weakness of mine. This place was called the Weiss Brauhaus, and had over 10 different types of wheat beer on tap. A friendly waitress (who was getting very friendly with another waitress – interesting viewing, for sure) took our order, openly laughing at our two-person attempt to try the entire menu. As we were drinking, a large – and I mean LARGE – man, decked out in lederhosen, braces, the whole gear, sat down at a table with another man, who I presumed to be a stranger from the “help me” glance that he shot me. This was before a group of scantily-clad, drunken girls on a hen party descended on their table, encouraging them to buy strange items from their hamper, and Mr Lederhosen somehow got his hands on a garter, fresh from one lady’s leg, and proceeded to sniff it in a spectacularly creepy manner. 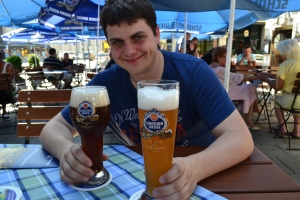 After quaffing much wheat beer, we decided to visit one of the more famous drinking establishments – the Hofbrauhaus. You can find more information about it here, but in a nutshell, it’s a brewery, a big restauarant/pub, it’s very old and famous and it was pretty crowded. Happily, it’s fine to join another table over in Germany, even if you don’t talk to them. We found a free table, and within minutes three people were asking if they could sit with us. They turned out to be British, and we exchanged a bit of conversation with them over some beer (actually just 3.80 or so for 0.5l, so no worse than the centre in general) which was pretty good, especially when used to wash down chicken and potatoes. Jeff had some kind of meatloaf with mustard, definitely not my idea of a good time, but he seemed to like it.

That night was hot, humid, and we couldn’t figure out how to open the balcony door at our couchsurf host’s house. We didn’t sleep too well, but the breakfast that he and his girlfriend laid out for us (as I mentioned before) more than made up for that: 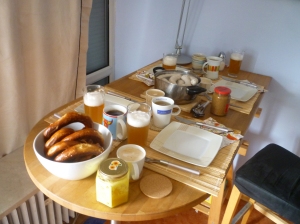 Beer for breakfast! These people live like kings. Alcoholic kings. But seriously, it turns out that such hearty breakfasts are only made on special occasions, perhaps similar to the “full English” (although I’m sure some do eat it every day).

After breakfast,our hosts joined us on the free walking tour (which meets in front of the Glockenspiel, (Underground stop Marienplatz) at 10.45am. We started by watching the Glockenspiel’s show – ranked #2 in “Europe’s Most Overrated Tourist Attractions”, just after our very own Astronomical clock in Prague. The show – no doubt a mechanical wonder at its time – depicts a jousting match at a wedding (I won’t spoil the thrilling conclusion) and twirling dancers symbolising the end of a plague, or something. I really wish I was able to remember historical stories a little better, but my brain never seems to hold on to them for long. 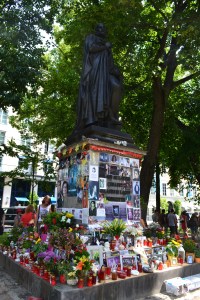 Along the tour, we were shown the Munich Frauenkirche -a  church supposedly built with the assistance of the devil. At least, that’s one of the legends used to explain the big footprint near the entrance – couldn’t possibly be a builder’s, of course. We poured in to see the footprint, but it was hidden under a sign saying “no flash photography”. A few sneakier members of the group figured this out, moved the sign, and took pictures. Probably with flash, because we’re all rebels like that.

Another interesting sight was the Michael Jackson memorial, which has kind of hijacked the statue of another composer, whose name I wish I could remember right now. Apparently he used to visit the Bayerischer Hof, a hotel that overlooks the monument. After his death, grieving fans congregated there to mourn together. The hotel – and the police – eventually got quite annoyed with this mass of mourning Michael fans, and told them to leave. But they wouldn’t, and they slowly chose this spot to pin their grief. Freshly lit candles showed us that people still visit their idol’s altar every day. It takes all sorts, as my mother would say. 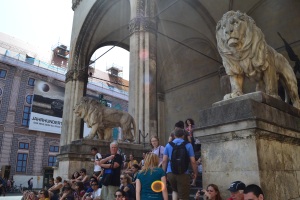 We walked around the rest of the centre, learning about the history of Nazis and the like. It was an interesting tour, although 2 and a half hours takes its toll on your attention span (and legs), and we were quite relieved when it was over. Our hosts led us to a cafe for cheesecake and tea, which was very nice, before leaving us to our own devices.

One thing that I’d heard about was the Englisch Garden – a park just north of Odeonsplatz. Near the entrance, one can find a wonderful thing. The river is apparently concentrated into such a small space that the pressure causes it to burst forth in something resembling surf-worthy waves, attracting the city’s surfers to come and ride the waves. Of course, this also attracts a lot of photographers. We stayed and watched for a while, because, well, why wouldn’t you? 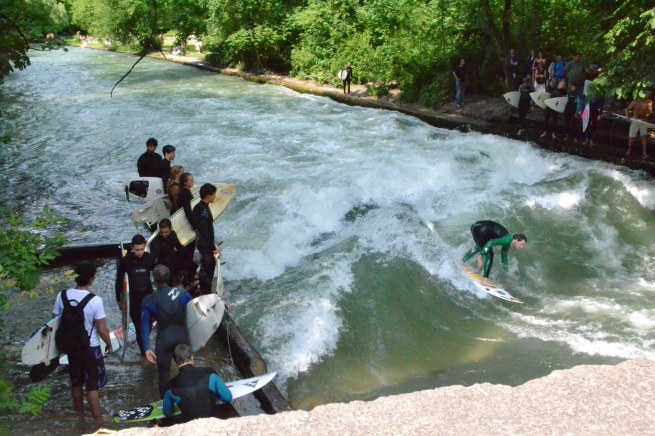 Our evening was spent in a slightly embarrassing way… searching for Pizza Hut. Ahem. We knew we’d seen one on the way in to the city, but it was hard to find it. It was actually near the Olympic stadium – famous, tragically, for the massacre in 1972. We didn’t go in to the stadium, but it definitely looked interesting enough from the outside. As sensitive as this will sound… we had only one thing on our minds, and it was commercialised, unhealthy, expensive pizza. We eventually found it along the road, near the BMW factory. I later found out that there is also a Pizza Hut near the centre. Ah well, ADVENTURE!

We spent the following day in Salzburg – check the next entry for more details about that! The original thought was to visit Neuschwanstein castle – that famous fairytale castle woven from the dreams of a mad king – but as most of it is under construction, we decided to look for day trips elsewhere. Salzburg is actually only two hours from Munich by train, and pretty cheap. Anyway, we’ll skip that for now, and to our final day.

I noticed that we were staying near Nymphenburg Palace. All I knew about it was that I had heard of it before, but still – it was the main summer residence for the rulers of Bavaria. King Ludwig II, of Neuschwanstein, was born there. 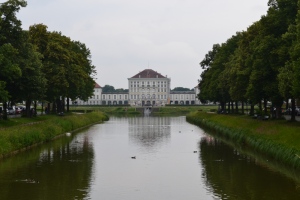 We didn’t go into the palace itself, but its extensive gardens make for a lovely walking tour. For 4Euros you can buy a ticket that lets you in to four small, summer houses, which are dotted around the gardens. Finding them is enough fun, especially if you stumble across things like the “Beaver Keeper’s House” and curious, friendly cats. The summer houses themselves are all decorated in various styles, although a Chinese vibe – very fashionable in the 19th century – is prevalent. It was all very nice, and we got some good walking exercise in.

To finish the day, we headed over to the Viktualienmarkt (yes, I thought “virtual alien market”), a lovely market under a maypole, where you can buy fruit, veg, meat, hummus, cheese, pretzels and of course beer. The great thing about it, besides the little beer garden surrounded by stalls, is that you can buy hot food, chunks of cheese and soft pretzels and make a picnic out of it. It’s certainly cheaper than many dining options around the city, and you can enjoy potato salad, chicken schnitzel and the omnipresent beer on a warm summer’s afternoon, with friends or whoever sits at your table.

One thought on “Germany: A small trip to Munich”