Yes…  I travelled during the pandemic.

My defence (if you feel I need one): the country where I live, the Czech Republic, was doing very well in terms of case numbers back in summer 2020. While my home country was being devastated by COVID, we sat comfortably in a country that had experienced less than 300 deaths in total. Countries on the European continent were opening to each other for the summer, with no quarantines necessary – you just needed to report your presence and maintain social distancing.

And so, a socially-distanced trip a friend and I did take.

Slovenia was experiencing a lot of indecision about whether to accept people from the Czech Republic due to a small outbreak in the Eastern parts, but we managed to slip in during an accepting time. Renting a car from Budget Rentals Prague (yeah, DO NOT recommend them if you don’t like being fined a surprise £300+ at the end for a tiny scratch that you have no memory of making), it took a solid 8 hours to drive all the way to our Airbnb, which was just outside the town of Ptuj, Slovenia.

To drive on Austria’s highways, you need to buy a “vignette”, a kind of motorway pass, which you can pick up at petrol stations just outside its borders. You can buy them for ten days minimum, which was annoying as we were just driving through Austria – once on day 1, and once on day 12. Ah well. The same applied for Slovenia; vignettes can be bought in the petrol stations in Austria as you approach the border. Of course, it is possible to set your GPS to avoid tolls – but you’ll spend hours navigating windy side roads, perhaps burning up in petrol what you have saved on the vignette.

The place we’d chosen outside Ptuj was amazing – imagine an entire field, all to yourself, with a little wooden cabin to sleep in. Outside the cabin door, there was a table and chairs – perfect for morning coffee. As for the bathroom; there was a perfectly functioning toilet and sink inside another wooden cabin, and an outdoor shower. A little way further across the field was the main living area – a kitchen and dining area that sat underneath a roof, but were still outside. The balcony looked out over a river full of lively frogs and birds, and out towards the Alps. Check the Airbnb listing here. 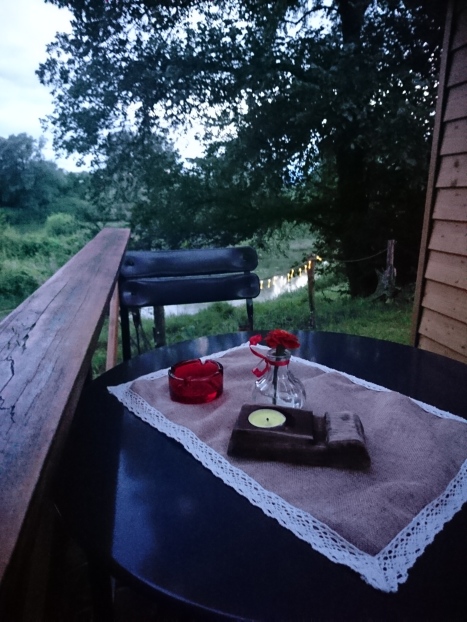 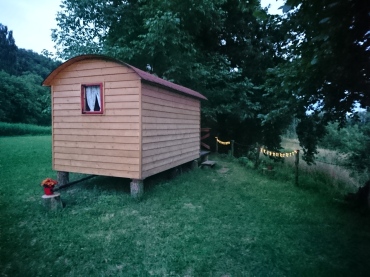 The place belonging to Nastya, whose farm was just across the road. She had horses grazing, an adorable dog that was very excited to see us, chickens and ducks, and beautiful vegetables growing in her garden. As we chatted, she casually gave us a courgette and some of her chicken’s eggs, fresh from the farm. Honestly, the place was paradise.

We spent our first day just hanging out at the house, walking around the forest and hills behind the farm, cooking up the simplest meals that we could (we went full Czech and brought a suitcase full of food from Prague) and reading. On the second day, we headed into Ptuj – just a 10-minute drive from the place.

Ptuj (pronounced something like pu-too-ee) is Slovenia’s oldest town, estimated to date back to 69BC. In the 1st century, Ptuj (which was called Poetovium) was an important part of the Ancient Roman Empire. Today, it is a charming town with a population of just over 17,000 people.

Compared to how COVID progressed later for us (especially around winter 2020), Slovenia in June 2020 was another world; cafés were still open, restaurants were still serving pizza, although only outdoor seating was allowed and all the staff wore masks. Slovenia only had around 1000 cases of COVID in total back then; a few months later, it sadly became one of the worst places in terms of cases per million. I can hazard a guess as to why; every Slovene we spoke to said something along the lines of “Oh, don’t you worry about COVID, it’s all a hoax”. What a shame.

We had some pizza at an unassuming little pizza place, walked around the town a little, and eventually made it up to the castle, where we took in some beautiful views of the city. The whole day basically consisted of walking around, as a lot of things like museums were closed. However, on our walk we discovered an aqua park… a waterpark, complete with slides and swimming pools, that appeared to be full.

Ptuj is also home to a charming tradition – kurentovanje – in which people dress up in some pretty funky costumes to “chase away winter”. Oh, what I would have given to see the natives of Ptuj dressed up in their sheepskin costumes, shaking their sticks at winter. The information centre had an example of the costume on display, at least: 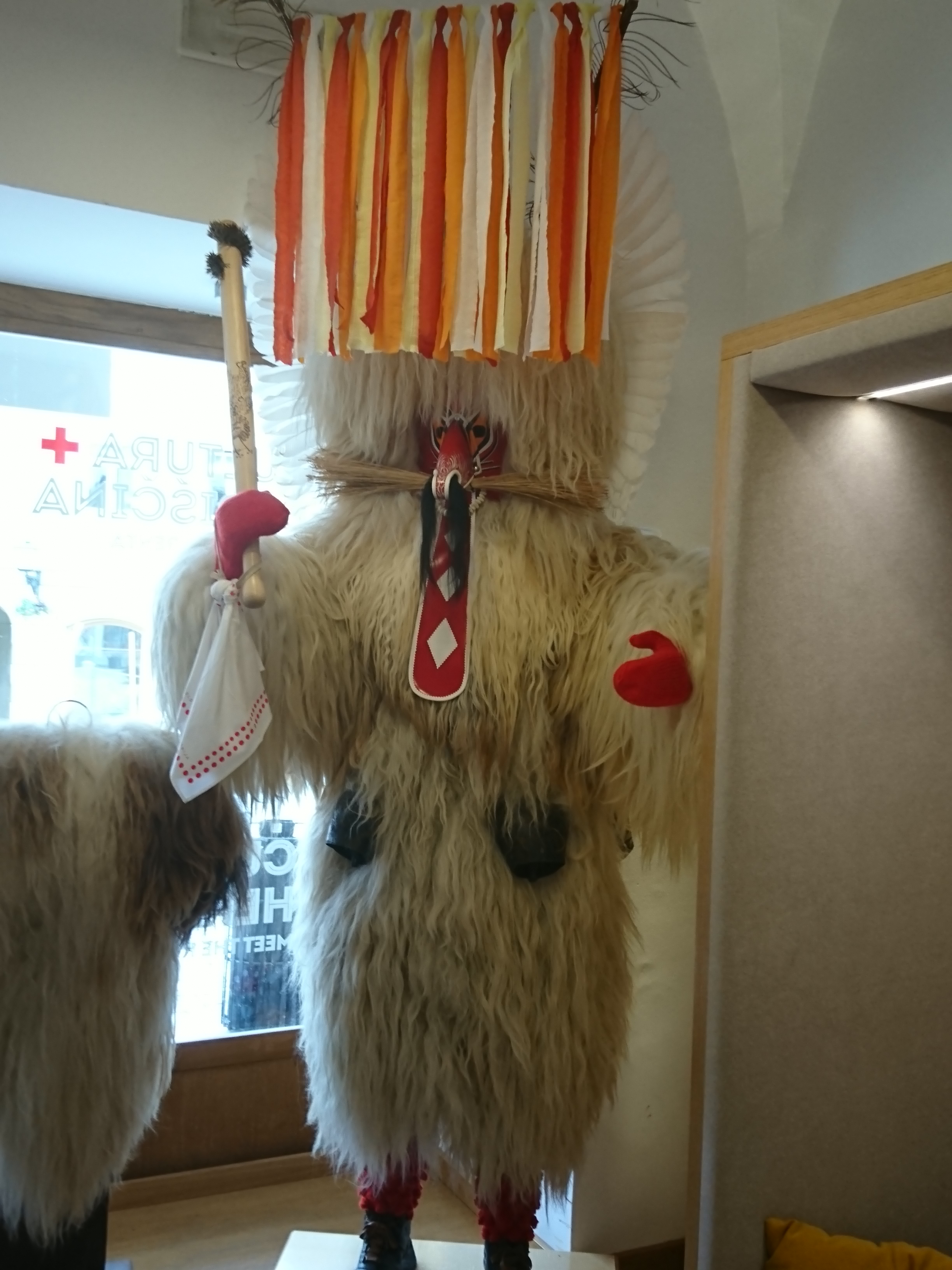 Here’s from the castle: 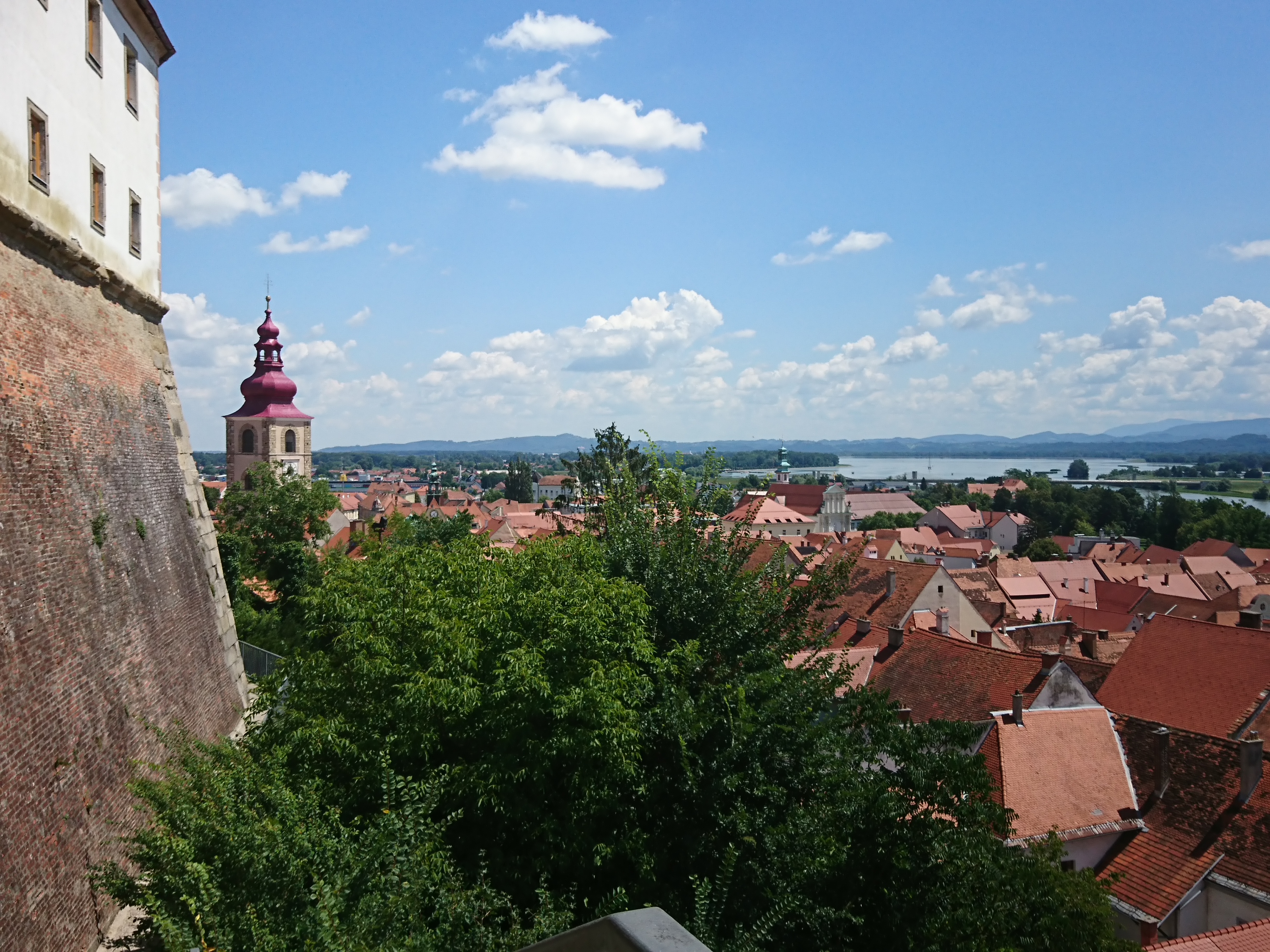 The next morning, after loading up our car with jars of ajvar from Lidl (and pumpkin seed oil – an amazing Slovenian favourite), we decided to give the water park a chance. Once again, I now look back and wonder what I was thinking; something like “chlorine will kill the germs, and it’s all outside!”. We paid to get in and gingerly made our way into a few pools. I swam a few lengths, sat in a couple of jacuzzi pools, and then realised that half the park was closed because of COVID – so no slides, no sauna rooms, no restaurants. Still, we managed to eat a few chips (fries) before deciding it was time to head to our second destination!

Our second Airbnb was in a little village called Laseno. “Village” may be a generous term – it was five houses up in the mountains. As my GPS led me up windier and windier narrow roads, I started to panic – could the rental car survive this? Was I going to crash into someone on the road? What if I couldn’t find the house?

When we arrived, we were struck with the most stunning view – the sun setting over the mountain tops. The place was quiet but for the barking of a few dogs, and the sky and air perfectly clear. Our hostess, Maja, welcomed us into our home – this time, just a small room and private bathroom within a larger house. I prayed that she was taking hygiene seriously. See the listing here.

That evening, we did nothing but sit out on the balcony, looking at the stars. Maya brought us some home-made tea to try, along with honey that she had made from dandelions. I had no idea that this was possible. Then, she showed us around her little rock garden – tomatoes, tarragon (the best herb you’ll ever find), some strange plant that was meant to be chillies. She also gave us a little Slovenian fruit liquor, which was so good we ended up buying a bottle of something similar the next day.

The next day, the aim was to check out some of the lakes of Slovenia. I had already been to Bled back in 2012, so I was drawn to something further and allegedly better – Bohinj. After getting confused around the roadworks in Bled, which we had to drive through anyway, I found myself driving around some tiny, narrow streets that were somehow supposed to accommodate cars driving in both directions. After a lot of stress and map-checking, I ended up taking a different route to Bohinj, arriving there a good hour later than planned.

It seems that there is no really cheap way to park at these popular attractions, so I parked outside the information centre (I don’t remember the price now, but it wasn’t cheap). The lake itself was marvellous – still, beautiful, and only bothered by a few kayakers and seagulls. We ate some hummus and bread that we had brought with us and then, looking at the prices for kayaking, I gave a hearty laugh and got into my swimsuit instead. I swam around for a while, a huge sense of relief flooding through my body as it was allowed to swim again for the first time in months. After ten minutes or so, I started to notice some raindrops falling.

I got out, changed into my clothes, and sensed that perhaps we had better go back to the car. And then – lo and behold – a huge thunderstorm began. So much for lake swimming. I quickly gave up on plans to go hiking at a nearby waterfall site, and we headed back towards Bled. By the time we arrived the famous Lake Bled, the rain had eased off. We walked about halfway around the lake, stopping for a small coffee at a place with tons of empty outdoor seating, and watched some baby ducks for a while. I’m afraid I didn’t manage to take any photos so, please, look here instead.

I have to say, the pictures I took back in 2012 are far superior to anything I took this time around, so please just… go look at the old post. Then again, I did have a much better camera back then, it was autumn and the weather was much nicer.

We also spent a day in Ljubljana, which I had also visited back in 2012. The main thing that had changed was that restaurants seemed to actually exist this time – in 2012 it had been a challenge to find a place that offered more than a sandwich. We wandered around, drinking coffee on the riverside, but it was too hot to really do much. Later that day, we met up with a couple of friends – somebody who used to live in Prague was suddenly living in Slovenia with her partner, so we went to a traditional Slovenian restaurant – Druga Violina – and were pleasantly surprised by the vegetarian options:

On the drive back towards Laseno, the rental car started beeping at me that the tyre pressure was too low. I panicked and tried to pull over to the ‘hard shoulder’ of the road (freeway?). Terrifyingly, massive lorries barrelled past me, leaving only a few inches between themselves and my wing mirror. The tyres felt fine, but we vowed to go and find a mechanic as soon as possible. Luckily, our Airbnb hostess directed us to a mechanic who checked them (for free) and told us it was fine – seems these new cars are just super sensitive.

Slovenia is a beautiful country, and one that I think is often overlooked by tourists (not that I will complain). If you’re into mountains, waterfalls, beautiful, clear rivers and lakes – then it’s definitely worth a visit. Prices are not that expensive, people are friendly and generally speak English, and it seems to be a very safe place all in all.

We couldn’t leave without doing at least one hike, so we chose Slap Rinka. It wasn’t too far a drive from our Airbnb, although the GPS was a little confused and tried to send me up an insanely steep, narrow road, which I ignored! You do have to drive into a national park – Logarska Valley Regional Park – and pay (during spring and summer) if you’re driving in (around 5 euros I think). Pretty waterfall:

Finally, it was time to continue our journey from Slovenia – onwards into Croatia. I had chosen the town of Pula for three reasons: firstly, it was quite near Slovenia so I didn’t have to drive far. Secondly, it looks beautiful. Thirdly, “pula” is Romanian for “dick” and I apparently have the emotional maturity of a 15-year-old.