Barely 2 hours from Prague lies the beautiful town of Karlovy Vary. Famous for its natural spas, every summer sees 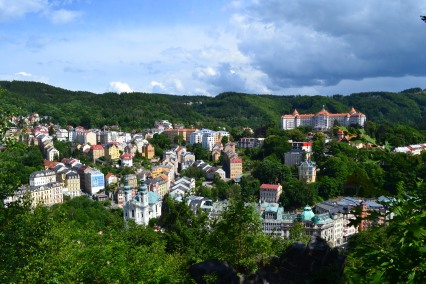 tourists flock to soothe their aching muscles in its healing waters. For many, it is a magical place, while others (including my guide book) see it as one massive tourist trap overcrowded with Russian hypochondriacs.

As we travelled in early June, it was neither overcrowded nor much of a tourist trap. Of course, the roads were dotted with little stands selling crappy souvenirs – Karlovy Vary’s particular speciality is a type of china jug (it looks like a small watering can) which you can fill up from various natural springs to try the water. We ended up doing it, of course, out of curiosity – the water was warm and sweet. Very interesting.

We set off from Prague from Florenc bus station at around 11am (the 9am bus tickets had sold out already) and arrived at around 13:15. A return ticket cost us somewhere in the vicinity of 280Kc, and as usual the Student Agency buses very comfortable and provided us with free hot drinks. By lunchtime we were able to enjoy a nice coffee and oplatky (a Czech sweet that Karlovy Vary is especially famous for – imagine thing layers of water with a flavoured cream between them) for around 50Kc total. Considering that this is around 2 Euros, it might be touristy by Czech standards, but when compared to Western Europe it’s still a bargain.

Our bus dropped us off at Tržnice bus station, where you’ll see a lot of platforms. Around here you can find the Becherovka museum, but other than that, heading towards the river (east) and follow it south. You’ll find a tourist information stand on the riverside, where you can pick up a free map. Ours had highlights, and as we didn’t have much on the agenda, we decided to walk around and check a few of them out. There are a lot of “Colonnades” around (left), under which you can find a lot of the warm, sweet water that I mentioned – as well as few tourists, of course. We were lucky enough to catch a Czech choir under one and were enchanted by their melodies, until they switched to “Ticket to Ride”, which killed the mood a little.

After strolling around and ignoring the most famous and obvious attraction – the baths/spas and their healing water – we decided visit the “Peter and Paul” church – a slightly magnificent, slightly out-of-place Russian church that can be found up a winding hill (where we stopped for a beer, of course). The town has a huge Russian population, and a lot of signs appear in Cyrillic as well as Czech.

For those of you who are into hiking, Karlovy Vary has some nice walks, too. Our map extended far beyond the town centre, and included a lot of green, but having committed to only a few hours there we decided to stay near the river. We took a mini-hike up a hill, where we took the picture at the top, and found “Stag’s Leap” – a slightly anticlimactic statue of a stag atop a rock. If you’re a little more hardcore, though, you can go far into the mountains – they even have a funicular that will take you to what I imagine is a much nicer view than ours.

Another thing that Karlovy Vary is famous for its Grand Hotel Pupp, which made its debut appearance in the James Bond film Casino Royale as the Hotel Splendide (allegedly in Montenegro). There are signs leading to this hotel, but I was surprised by its subtlety. It lies at the curve of the river, where the street turns, and is much less dramatic and impressive than you might expect. Still, the scenery behind it is very nice, and the staff were very welcoming when we decided to wander in to their café for a drink. You might expect somewhere with that much class to capitalise on its status with through-the-roof prices, and while the average Czech would rather smuggle a cheese and ham roll in his jacket for 24 hours than pay for a meal there, it worked out at the equivalent of 6 euros each for a cup of tea and a nice berry pastry with asparagus ice-cream. Yes, asparagus ice-cream – it seems that weird ice-cream flavours can be found everywhere! If you’re curious, it was actually quite nice. The décor inside the hotel was very classy – we had to walk through a lounge and the lobby to find the toilets – and I was very impressed by the fact that I wasn’t turfed out like common street scum, as I generally fear when in the vicinity of posh places. 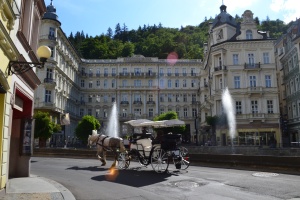 (Left – the Grand Hotel Pupp) Generally it was a nice day, which we finished off by following the map to a “Japanese garden” (I wouldn’t bother – it’s one Yin Yang sculpture). On the way, we saw a sign for another Karlovy Vary attraction – the BEER SPA!!! That’s right; you can, if you make a reservation early enough, find yourself bathing in lovely beer. If you’ve ever seen the TV show Three Sheets, where an annoying guy and an over-enthusiastic user of sound effects get drunk in various countries around the world, you’ll see the beer bath in action. Czechs really do love their beer.

We found dinner at a nice restaurant near the Market Colonnade – the food was nothing special, but it was pretty cheap for the overall food prices in the city (maybe 150-200 per dish). I don’t remember what it was called, either, but had something involving magic in the title.

One warning – the bus did NOT pick us up from the same station that it dropped us off at. We waited, nervously, for ten minutes before I noticed that my map also contained a “long-distance bus station” around 300m away (next to the train station). We made our brisk way there, and managed to get on the bus just in time – but only just. This is worth pointing out if you don’t want to be stuck there overnight!