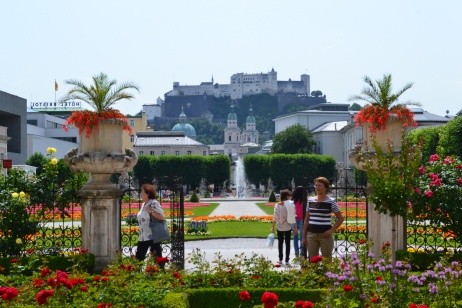 As a day trip from Munich, we decided to visit Salzburg, Austria. What did I know about Salzburg? Well, of course, it’s where The Sound of Music was set and filmed, and it’s where Mozart comes from. These two facts are seemingly enough to attract tourists, anyway, as we soon discovered upon arrival.

Salzburg is surprisingly cheap to get to from Munich if you take the right train. The Bavarian region of Germany does something called a Bayern ticket, which is around 23 Euros for a day of unlimited travelling in the region. However, the region also extends to Salzburg, and for each extra person added to the ticket it costs just 3 Euros (up to 5 people can use it). So, for two of us, it worked out very nicely. We did have to catch the slower, more crowded local trains, but it was worth it.

Salzburg is a beautiful city, its fortress proudly looming over the main town, its stunning mountains the perfect backdrop. Mozart chocolates and Sound of Music memorabilia abound, and prices definitely aren’t cheap, but there are ways to explore the city without spending too much.

As a big fan of The Sound of Music, I wanted to see as many of its filming locations as possible. The city runs a tour bus, a hop-on-hop-off affair, touring around those locations for something like 35 Euros, but I wanted to try it on my own. With a little prior internet research and a notebook, I managed to see a few of the spots without spending a cent. Many of the locations are not in Salzburg proper, so we stuck to the ones that were accessible on foot.

We start our journey in the Mirabell Gardens, near the centre and easy to find on any map (free admission). This is, you might recognise, where Maria and the children sang some of Do-Re-Mi. They run around the fountain, march past a few statues and do silly dances, before finally jumping up and down the stairs. Much to my sadness, the camera had a very high white balance or something going on when I photographed the stairs, so you can’t really see them. But, here we go: 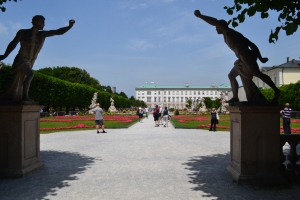 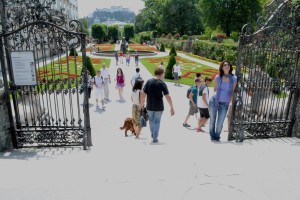 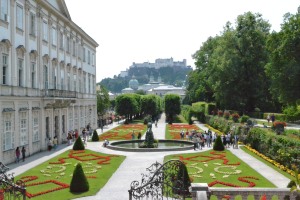 After crossing the Salzach river, we were able to walk down a long of Salzburg’s charming side streets. Another feature that the city is supposedly famous for is the street of shop signs – traditionally hung outside shops to alert passers-by of their trade, you can now find far more well-known companies mimicking the style. While I’m not the biggest fan of commercialism, tell me that isn’t the cutest McDonalds sign you’ve ever seen… 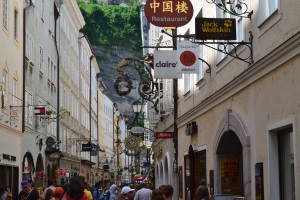 Walking around those tiny streets, I met another familiar sight:

This – horse thing – I don’t know what it is, to be honest, but it also appears in the song, when the children and Maria are prancing around Salzburg in their curtain clothes. It’s a few steps away from University Square, where one can take a small tour to see the “Rock Riding School” or Felsenreitschule. That is the theatre where the Von Trapp Family Singers perform near the end of the film, before escaping from the Nazis. It is now incorporated into the Haus Fur Mozart and is available to view either during actual concerts or during the way when it is not being used to practice in. Sadly, we were unable to visit as performers were using it to practice, but it’s always worth asking. 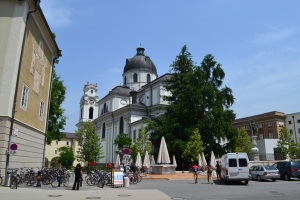 So, on with the tour. Another key location is Residenzplatz, which could be one of Salzburg’s main squares. This square was used during “I Have Confidence” (Maria playfully flicks some water across the fountain, which must have been harder than it looked because the fountain is tall) and later on, when the Nazis put up their flags and try to recruit the Captain. Familiar? 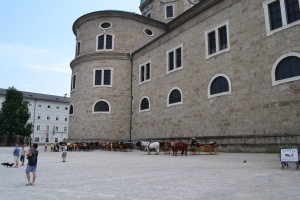 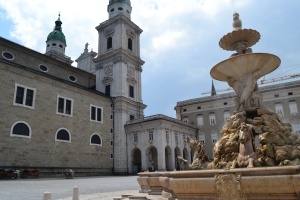 After that, we grabbed some delicious ice cream and wandered over to Nonnberg – easy enough to find on the map, and up a fair few stairs. I believe that Nonnberg Abbey is where the REAL Maria Von Trapp went in her nun days, as well as being used in the film. As the studio wasn’t allowed to film inside the abbey, they created their own (in Hollywood, maybe), but we were able to go in and listen the delightful sounds of the organ being re-tuned. 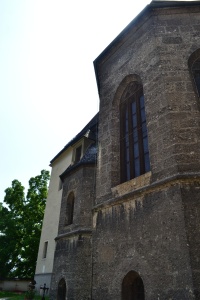 Our final stop was Schloss Leopoldskron – now a private academic institute, you might recognise it as a certain large house on a lake. While you can’t enter it, you can walk around the lake and view it from across the water. What we discovered was that two houses were used for the Von Trapp house – the other being the significantly smaller house that Maria arrives at during “I Have Confidence”, looks at through the gates and mutters “oh, help”. That building is reportedly a little further from Salzburg. The Schloss Leopoldskron is just off the main tourist map, but you can see a little of the lake in the bottom right. Without any other guidance, we walked towards it and hoped for the best. We did get a little lost, so I would recommend a bigger map or GPS, but eventually we spotted a Sound of Music tour bus and followed it! 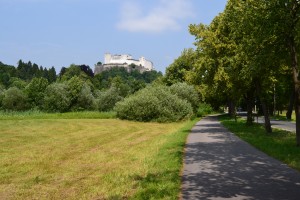 The gates to Schloss Leopoldskron…

And the thing itself: 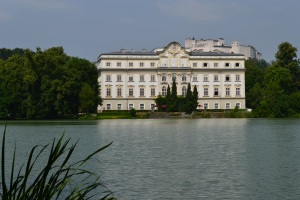 Hooray! So, after seeing those lovely sights, we walked back into the centre and had some curry, before grabbing the 2-hour train back to Munich. Lovely!