When my friend invited me to come and visit her in Aarhus, Denmark, a city I had not even heard of, I jumped at the chance. I soon learned that Aarhus is the second largest city in Denmark (home to just 273,000 people) and was founded as a Viking settlement back in the 8th century. It was originally named Aros, which is interestingly the Welsh word for “Stay” – whether or not there is any connection, I can’t be sure – but Wales did contain many Viking settlements, and I just found out from a quick search that Anglesey comes from a Norse word (Onglesey). 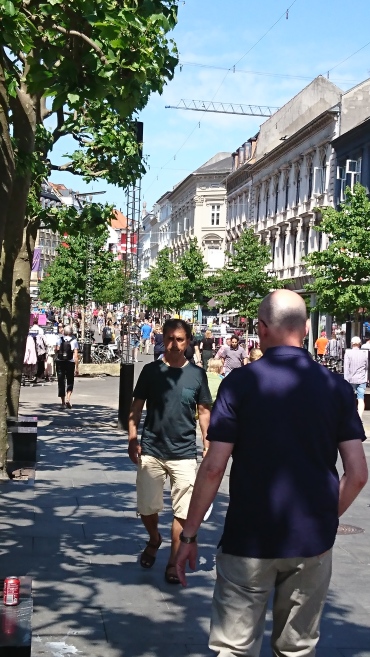 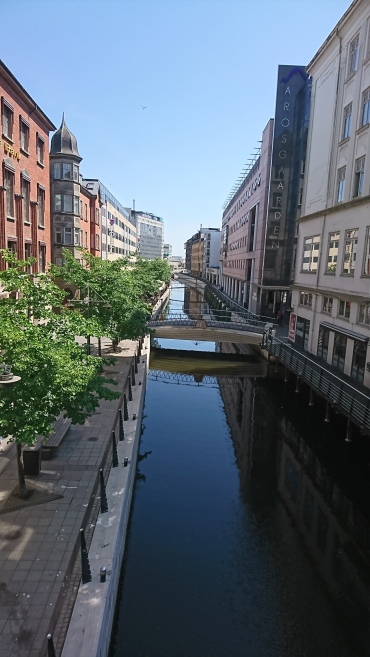 Anyway, I had never been to Denmark, and so wanted to find out whether my impressions of it as a Utopia full of happy, smiling blonde people with no financial worries was accurate. It turns out that, for the most part, that is exactly what I saw: although Aarhus does have some ethnic minorities, the majority of what I saw was smiling, affluent white folk, happy dads pushing babies around, lattes in hand, and little blonde kids running around everywhere. I had been told to expect empty restaurants because nobody could afford to eat out, but that wasn’t true – most places had a fair number of customers, and there were plenty of people sitting out on terraces in the sun.

On our first day, we wandered down to the Viking Museum – one of Aarhus’s free attractions. It’s just a small room with some Viking facts, a small reconstructed house, and a few artefacts behind glass cases. It was quite interesting, but I suspect that if I had splashed out on the Old Town Museum (for 250 Danish Kroner, or around £30, I wasn’t feeling up to it), where they have reconstructed a realistic Danish town from the ‘olden times’ complete with actors and re-enactments of working schools and shops. However, I am still living on Czech salary and wanted to keep the costs as low as I could while still having fun, so we didn’t go there!

However, we wandered over to the coast, jumped around in a fountain for a while, then headed over to the Dome of Visions. http://domeofvisions.dk/ – It’s a glass dome that promises exciting events and experiments towards future visions, or something like that, although all we saw were some nice seats inside a glass dome and signs telling us that it 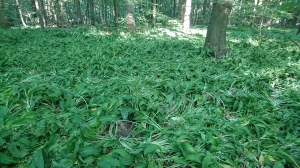 was closed. Nevertheless, we wandered around the area for a while, then my friend showed me the nearby forest – a place where wild garlic grows. Much to my dismay, there was SO much wild garlic here that nobody could possibly conceive of collecting it all and eating it before it died. Apparently, had I arrived a week earlier, I would have seen a white carpet of flowering garlic, but now – after a couple of storms – most of it was dying. A few pigeons were nibbling at it, and apparently the Danes had already collected loads of it, but most of it was to go to waste. The forest smelt wonderful (I love the smell of garlic)!

I was quite excited to find Poké – a Hawaiian dish, which is basically “sushi ingredients

in a bowl” – had made its way to Denmark, so that’s what we had for dinner. Mine had avocado, pineapple and salmon… I knew that I was breaking a lot of mysustainability/health rules, but I’m afraid to say that I let it slide because I was on holiday. It was delicious!

On our walk back to my friend’s flat, we saw a pile of what looked like soil by a lamppost. She told me that it was actually cinnamon – apparently, it’s a Danish tradition that if somebody isn’t married by the age of 25, their friends and family cover them in cinnamon – often tying you to a lamppost. If that wasn’t bad enough, if you’re still unmarried by 30, the spice is upgraded to pepper. As well as being incredibly old-fashioned, all I could think was “what a horrible waste of food”… It was 10:30pm before it started getting dark that night.

The next day was actually Pride 2018, and it was starting exactly where we wanted to go – outside the ARoS museum, where the famous ‘rainbow’ panorama is: 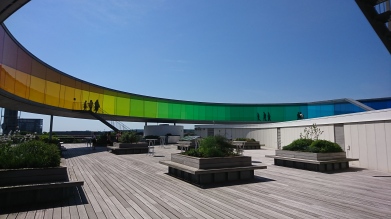 My friend had a pass that allowed her to bring in one guest, so we headed over at around 11:30. The parade was meant to start at 11:45 but it seemed a bit dead there, with maybe 20-30 people. Still, we bought some lunch and a rainbow unicorn badge out of solidarity, then headed into the museum. We walked around the rainbow panorama first, which I have to say is surprisingly disorientating – the white display on my phone constantly seemed to be changing colours, but I think it was just my eyes trying to adjust to the changing colours. 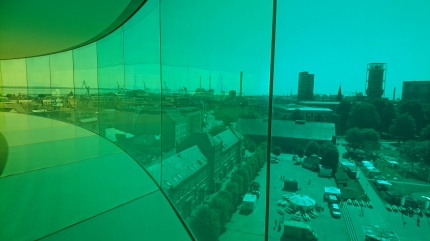 We checked out the entire museum… ranging from some art that failed to inspire much excitement in me, to some installation rooms with funky lights, to a floor dedicated entirely to a 3-part film about the Christian Crusades acted with marionette puppets… which got increasingly more surreal in each part. We started watching the film, but after 15 minutes we started to worry about where the time was going, so we carried on walking.

The 5th floor had an exhibition that talked about the refugee crisis, other problems facing the world, and our unwillingness to face the problems.

I’m not the most sophisticated art critic:

In between each floor, we kept peeking out to see how Pride was going. By 1pm, it was suddenly full of people – hundreds of them – and some live music playing. So, we went and looked around for a while before realising that we didn’t really feel in the mood for crowds!

Another free attraction in Aarhus is the Botanical Garden and its bio domes, where they grow plants from a variety of regions. As well as butterflies, you can find coffee, papaya, bananas, and other exotic things growing in there…. 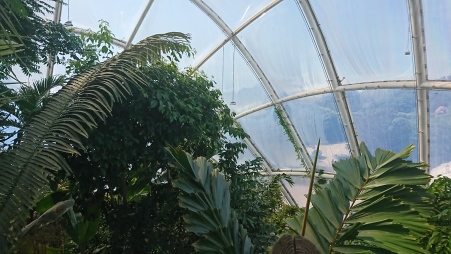 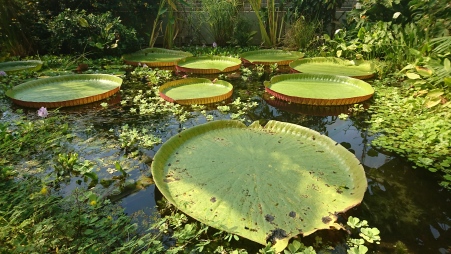 I had always been told that Denmark was a very expensive place, but my friend told me – just imagine everything you see here is in Czech crowns, because that’s the rough equivalent compared to salaries here. So, if a coffee is 30-45 Danish Kroner, it’s the salary equivalent of 30-45 Czech crowns… which would actually be pretty cheap in Prague. Meals suddenly didn’t seem so expensive. In fact, even when I converted them to British pounds, it suddenly seemed to be in a very similar price range to London… £15 for a meal, £4 for a coffee?

The difference here being that PhD students are taking home around £3500-4000 a month, and Bachelor students are given around £500 a month from the government to help them “get started in life”… not to mention the free healthcare, social welfare, etc. I have to say that I never saw any homeless people, or even anybody who looked remotely scruffy. I actually started to feel creeped out… wondering “Where am I!? What are they doing with the people who don’t fit into this Utopian dream? Why is everyone supposedly so happy, when Denmark is in the top 5 countries for antidepressant use globally?”

Trying to find out what food I needed to try while I was here, I learnt a few things about Danish cuisine: they love rye bread, cake, and seafood. I ate far too much cake and bread in the few days I was there, as well as more seafood than I had in the last two or three years. I’m sorry, Denmark – I wasn’t too impressed, although of course the smoked salmon was of high quality and the cake was excellent, there was nothing that really blew my mind.

On day 3, we headed over to the beach, where there was a collection of small cafes and

restaurants. We went to the Mariner, which had a nice balcony overlooking the harbour, and had this fancy fish platter (sorry, little Lobster, and other sea creatures!) and the most overpriced coffee I have ever had. We sauntered over to the beach, where hundreds of people were sunbathing and swimming in the sea, and dipped our feet in the water. I decided it was too cold to go any further – although the following day, I decided to brave it and actually swam in the sea (for 3 minutes).

We were joined by my friend’s friend, who is from Denmark. I found out, though, that it’s been pretty hard for my friend to make friends with other Danes here – mostly because their calendar is chock-full of family events for 2-3 months in advance. I never realised how family-obsessed the Danes were, but what with the cinnamon thing, all the money from the government, and the apparently excellent post-natal care they get, it’s no wonder that they’re churning out more blonde, smiling kids.

Then we wandered over to Dyrehaven, a park that’s full of deer! We wandered around as the deer casually sauntered after us, sniffing for food. I didn’t realise what strange, pathetic whining sounds deer are capable of making… 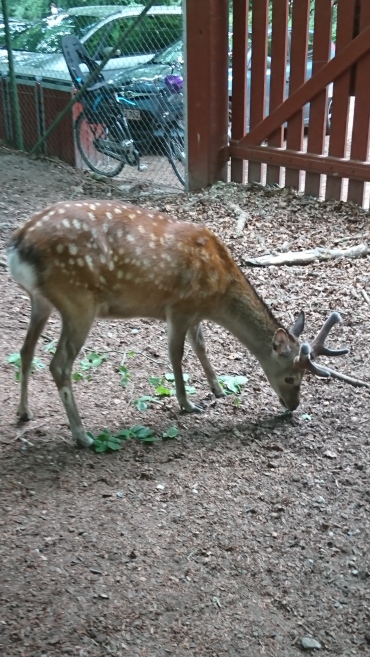 At one point, we saw a tiny baby deer and its mother. I took out my phone to take a photo, and suddenly the mother was running towards us. Before I realised what was happening, it jumped on its hind legs and tried to attack my friend with its front legs! Fortunately, she had a backpack and used it as a shield, and the deer retreated… but we were all a bit shaken up, and decided to head out again, after that.