It was a cold October evening when we arrived in Budapest. It was already almost 11pm, and most of the airport had closed up

for the night, apart from a small cafe who wouldn’t break our freshly withdrawn 5000 Forint note. With our massive backpacks strapped into place, we each picked up the other two bags that contained our lives and made our way to the bus stop.

Barely a month beforehand, we had decided to uproot ourselves yet again. There were £25 flights with WizzAir, going from Birmingham directly to Budapest – £15 each with our Wizzair membership (which is £20 for the year for two people). After I had lost my job and the two of us had finished our Masters courses, we wondered whether it was worth eating into our savings by staying in the UK while applying for jobs and looking for the next step. Travelling around Eastern Europe on the cheap, Couchsurfing and volunteering our way around, seemed like a far more economic – and interesting – option. However, that had somehow evolved into a decision to move to Cluj-Napoca, Romania, where there is an opportunity for us to get involved with the work of a peacebuilding organisation in the city. Hence the whole “lives in two backpacks” thing.

We found somebody to stay with via Trampolinn, a website similar to Couchsurfing but with a difference – you accrue points by letting people stay at yours or by doing other things (inviting members etc) which you then “spend” when you stay at other places. You can also purchase points with money, but even had we done that, our three night stay would have come to around £5 for the whole time – but you get so many points just for completing your profile that we were able to afford three nights on a couch in Budapest. There’s a booking fee, meaning that we managed to get the whole thing for £4 or so. Our host was lovely, let us sleep in his bed, and came out with us for beers one night.

Getting around – Public transport is easy to use in Budapest – there are machines where you can buy a ticket that’s good for one journey, or a daily ticket. These machines have English options and take debit cards as well as cash. Just make sure to validate your ticket if it’s a one journey one (the very thin ones) – you need to slide it into the boxes that you see on the buses or at the entrance to the metro (subway/underground). It’s a well-connected city, and it’s pretty easy to work out where you’re going because you can use Google Maps (if you have the app on your phone) – just use the “directions” option and click on public transport. There’s a metro system that’s pretty easy to navigate, as well as buses and trams. Budapest also has Über, which we were able to use with our UK-based app/account with no problem!

Checking out the city – The first day was started with a free walking tour, which starts from 10.30 in Vörösmarty Tér every 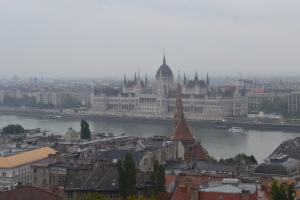 day. Although it was drizzling with rain, the tour was an enjoyable three hour walk around Budapest’s main sights, with a lot of history and some Hungarian lessons thrown in. I actually had no idea that the Hungarians had originally come over from Mongolia, and that this is why the language has more in common (according to the guide) to East Asian languages than to other European ones. Hungarian does seem like a pretty intimidating language – there’s almost nothing familiar to use as a starting point (unlike Romanian, which is very similar to Italian or French)! Still, our guide taught us some basics, and I was very impressed that she had an entire “rain-proof” route worked out, where there was always somewhere we could stand that was sheltered.

The tour took us to the castle district area, and as with any free tour, we paid a tip and carried on exploring the area a little.

The castle is on the Buda side of the Danube – the city is made up of two regions, Buda and Pest, with Buda being the more expensive. With that in mind, we wandered around the area a little before taking a bus back down the hill into the Pest area to look for some reasonably priced lunch.

We actually followed a recommendation I’d found online and went to Szegedi Halbisztró, which was really near the Oktagon metro station. It’s very reasonably priced, and you can find delicious, traditional Hungarian food there, so they say! I don’t really know how traditional our meals were, but Jeff had some kind of fish goulash stew, while I had this amazing mountain of food (potatoes, carp, bacon): 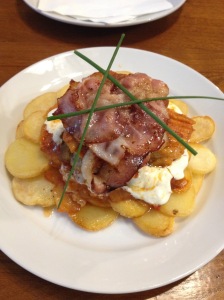 And here’s the fish stew:

We then decided to check out some of Budapest’s “ruin pubs” – you can actually check this website to find a directory of all of them. Ruin pubs are what they sound like – old, abandoned buildings that have been lovingly recreated into spaces for performances, exhibitions and socialising. There are lots of them around Budapest, constantly popping up or moving around, and they’re equally popular with locals and tourists.

The “original” ruin pub is Szimpla Kert, which is definitely worth a visit. It’s hard to explain the atmosphere of a two-storey 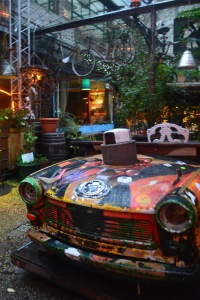 building that’s been turned into a pub area, but it’s something special. Every room is different, whether a shisha lounge, wine bar or coffee corner. Twinkling fairy lights and candles make for a mysterious, fantastic atmosphere, and the more you look around, the more you notice that everything is made from what might have been junk of some sort.

There’s an old car that’s been converted into a table; part of an old carousel just chilling as decoration in the shisha bar; and old bits of scaffolding and bicycles dangling from the ceiling. Apparently, the place also hosts a farmer’s market and some other things – all pretty exciting.

Another ruin pub that we later visited was Élesztő. At the front, there’s a café that looks like your grandmother’s sitting room – if your grandmother is a little crazy and likes to stuff old teddies, dolls and framed pieces of driftwood into every corner. There are a few different bars, where you can choose from a massive selection of beers or cocktails, and there’s even a burger room where you can pick up one of the most amazing pulled pork burgers I’ve ever tried. There’s outdoor seating in the middle of the action, too. It’s hard to pinpoint the atmosphere of a ruin pub, but I’d definitely recommend giving them a try. 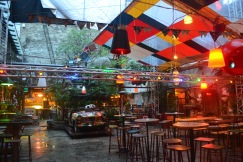 Thermal baths are a huge deal in Hungary – almost every town seems to have at least one small medicinal bath. They’re very similar to Turkish baths, or perhaps to Japanese onsen – the idea being that the hot water and the minerals within it are not only relaxing, but can cure all kinds of ailments. Budapest has a ton of thermal baths, and we ended up going to one of the most famous (and expensive), the Széchenyi Baths. For a day ticket, it’s 4500 Forint on a weekday, or 5000 if you want a private cabin to get changed in (good if you don’t want to flash a bunch of strangers). 4500 is around £10, give or take, so it’s a bit pricey for the budget traveller but something worth doing as a one-off. Besides, you’re surrounded by a pretty wonderful view, and you can watch old guys playing chess in the water.

When you pay at the main reception, you get a wristband with a magical device inside – it lets you select any locker, press the “watch” part of the wristband to the lock, and the locker will then only open to the touch of your specific wristband. However, the problem with this is that you can forget which number locker you picked – so I definitely recommend making a note of it. I’d also recommend taking flip-flops, as walking around barefoot on the cold concrete outside was not very pleasant. You also need a swimming cap for the central pool, which is a swimming pool, but the others are fine.

The water in the outdoor thermal bath was wonderfully warm (around 37 C), and a beautiful contrast to the drizzly, cold

weather. Make sure that you don’t miss out on the maze of indoor baths, too. Through one of the doors around the pool you’ll see a fine that says “gyógyfürdö” or something like that! Inside the building, there are around 10 other baths, ranging from the ice cold “plunge pool” to a 40 C hot tub. Some of the pools were scented, with some clearly smelling sulphur-like, and there are sauna rooms and steam rooms, too. I didn’t manage to take any of my own pictures here, as I didn’t want to bring my camera into the wet areas.

Here’s a tip – there were some radiators along the sides of some of the indoor rooms, next to the pools, which were a good place to put our towels while we bathed. It’s also an idea to bring some money with you if you can find a way for it not to get wet, as there’s a café by the outdoor baths where you can take a break and get some food/coffee.

Szechenyi is lovely, but it apparently gets very crowded in the peak season as it’s well-known by tourists. They also have night-time bath parties, which look a bit crazy! Nothing like alcohol and deep, hot water. If that’s not your thing, there are plenty of other baths in Budapest, and they all sound pretty nice in different ways. Our host really recommended Király baths, which are much smaller, but also around half the price of the more touristy ones.

What else? We didn’t do a lot more in Budapest, although we found a pub that served Ferdinand beer on draft – one of my favourite Czech beers – the Ferdinand Monarchia Cseh Sörház, which also had Czech food! It’s been a very long time since we were last in Prague, so we were very happy about this place.

The rest of the time was spent generally wandering around, and as we had day tickets, we rode the trams a little to see where we ended up. Walking around Budapest at night, along the Danube, is a lovely experience, too. It reminded me so much of Prague! Make sure you walk along past the Parliament Building (below) – the largest building in Hungary, it’s also apparently based on London’s Houses of Parliament but built to be 2 meters longer! You can walk right by it, and gazing up at it, all lit up, is quite daunting and impressive.

Hungarian food is great, the prices are reasonable, it’s really easy to get around and there’s loads of things to do – whether you want to check out historical monuments, go clubbing, play some Escape Games (it has over 30) or soak in some thermal baths. Keep your eye on Wizzair’s prices…