Nearing the end of our trip, we decided to spend our last few days (and remaining dregs of money) in Laos.

Getting from Bangkok, Thailand to Vientiane, Laos by train

The train from Bangkok apparently now runs directly into Laos, stopping around 13km outside of Vietniane. Research led us to believe that it would be easier to get off the train at Nong Khai (still in Thailand), cross the border into Laos and then take a bus into Vientiane. We booked an overnight train (leaving Bangkok at 8pm, arriving Nong Khai at 7.45 supposedly – although it was an hour or two behind).

Overnight trains in Thailand are great – far nicer than the ones we used in Vietnam. When you get onto the train, you are led to your seats. However, later in the evening, train staff come down the carriage and – in a matter of minutes – turn your seating area into bunk beds! These beds are more luxurious than Vietnam’s because you have curtains – for your privacy and a bit of darkness – and there’s actually a ladder to help you get onto the top bunk. If you can ask for a bottom bunk when booking your ticket, though, go for it – the bottom bunks seem much more comfortable, and the curtains do a much better job of blocking out the light.

The food and drink available on board is, of course, much more expensive than it would be elsewhere – so, if you’re on a budget, just bring a bunch of snacks with you! We filled our bags with 7-11 “sandwiches” and other strange things to keep ourselves going until we arrived Nong Khai.

A tuk-tuk from the train station to the border crossing cost about 100 baht, but it turns out that you can walk in about 10 minutes (turn left when leaving the station, left again, then the first right, I think!).

A visa on arrival is available and costs between $30-45 dollars, depending on your nationality. When you get there, you just fill in a form, hand your passport and the money to someone behind the counter, and wait. The process of returning passports with your new visa in them is a little messy – they’ll hold out your passport, try to pronounce your name, and hope that the right person comes up to claim it. You might be at the crossing for a while, depending on how many people are there.

After that, you’ll have to hop on the bus across the Friendship Bridge, which connects Thailand and Laos, before entering Laos. From there, you’ll need to take a bus in to Vietiane – the local bus is the #14 and goes to Talat Sao (morning market in Vientiane), takes about 30 minutes and costs 5000 kip, which is about 40p/$0.60.

Laos’s capital city is a pleasant place to spend a couple of days, sipping Beer Lao and wandering around. Beer Lao is pretty much the only beer you’ll find in Laos (with a couple of exceptions), so it’s a good thing that it’s a great beer – made from techniques learnt in the Czech Republic!

Food in Vientiane was a little disappointing – we seemed limited either to very expensive “traditional” Laotian dishes or a series of restaurants serving a range of stir-fries, which were decent but it seemed that everywhere had the exact same menu. We found one place called Lao Kitchen, on Rue Hengboun, which had good reviews and delivered a good, varied menu with those wonderful baskets of sticky rice, so there’s one place we’d recommend.

Our Lonely Planet book also told us about a North Korean restaurant, where the waitresses dance and sing. We even managed to book a table… but it was far out of the centre, and our tuk-tuk driver got completely lost and had no idea where he was going. Worse, we tried to direct him using our maps, but we kept getting lost. We drove around in circles for about an hour, before we gave up and told him to go back to the centre. He still wanted to charge us for petrol… reluctantly, we handed over about half the agreed fair and walked away. I’m pretty sure his fellow drivers shouted at him for not being able to find the place – it seemed that the rest of them knew where it was.

Laos is often described as “lazy”, and indeed the bar we ended up lazing in was along the river – I can’t remember the name of it now, but it has a few floors and we sat high up with a pretty good view. The strange thing about the nightlife here is that it seems to die out around 10-11pm, but it seems that there are plenty of night clubs a little further out of the city that open later and cost a fair bit to get into.

Wandering along the river front in the evening, you might be able to find some interesting items at the markets. All we bought was a Beer Lao T-shirt for Jeff, but here’s some of what we could have bought… 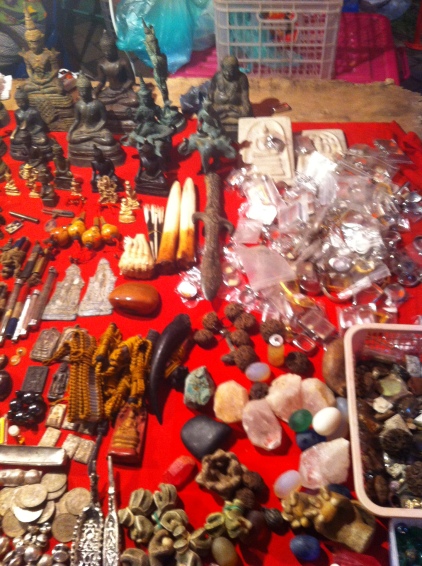 Now, I’m not sure, but I’m quite sure there’s a bit of ivory in there somewhere!

Apart from wandering around the centre, one of the places worth visiting in Vietniane is the COPE visitor centre. COPE provides prosthetic limbs for those who have lost them due to UXO – unexploded ordinance, in other words landmines or bombs that were laid down during the Vietnam war and still have not detonated.

Despite not being “officially” a part of the US/Vietnam was, Laos has suffered heavily due to its geographical location and the fact that plenty of North Vietnamese were thought to be hiding there. To this day, there are thought to be 80 million unexploded bombs in Laos, and from 1974-2011 there were more than 20,000 deaths or injuries as the result of UXO (40% of them were children). Take a look at this for some sobering facts.

The museum demonstrates some of the prosthetic limbs that it provides and shows stories about individuals who have been affected by UXO and those whose lives have been improved by their new limbs. They also play documentaries in their mini cinema; we watched one about a team of bomb disposal experts travelling through Laos, training local people in how to handle UXO. Often, entire villages would have to move while they removed the bomb, and some older people were unwilling to uproot. It was also shocking to see how children will play with unexploded grenades, when found, and how it’s common to try selling unexploded bombs as scrap metal.

The Buddha Park, or Xieng Khuan, is definitely worth a visit if you’re in Vientiane. It’s a sculpture park full of Buddhist/Hindu statues, kind of representing a beautiful meeting of religions and a pretty wild imagination. The sculptures are the work of Luang Pu Bunleua Sulilat, and despite their old appearance, they were actually built in or after 1958. 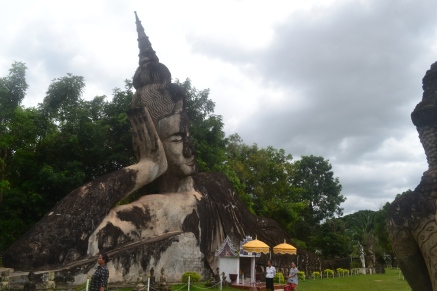 Getting there: From Vientiane, take the #14 bus back to the border crossing. From there, you’ll need to get a tuk-tuk – the bus used to go all the way there, but the roads are now too bad. We managed to negotiate a tuk-tuk for about £2, along with some other tourists.

They are not kidding about the bad roads – expect the bumpiest, dustiest ride of your life, where you’ll fly over potholes and feel as if you’re sitting on a very excited washing machine. The journey lasts about 20 minutes, although it felt like more, and the road gave a glimpse into everyday Lao village life along the way.

Enjoy some images of the Buddha Park… 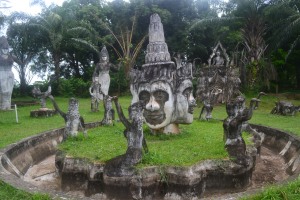 There’s also a nice little café next to the park, where you can enjoy a fresh coconut and watch the cows grazing by the river before heading back. Ooh, and check out these monks climbing up the steep steps into their temple: 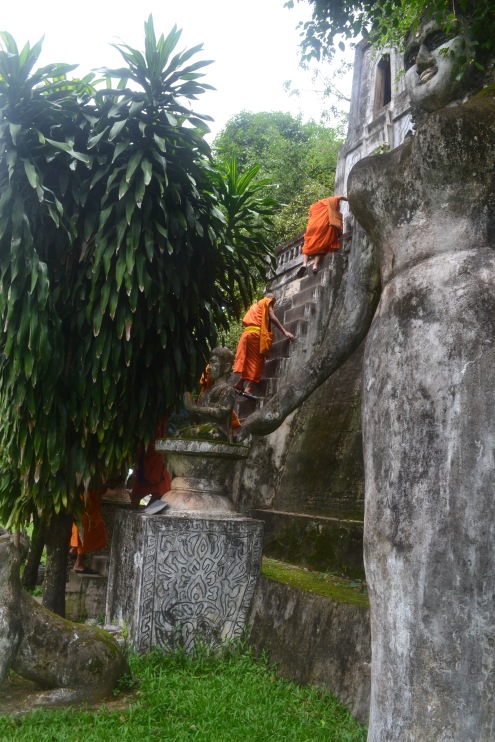 Our driver waited for us and took us back to the bus stop, which is good as I don’t know how else we could have left!