We reached Chiang Rai by taking a bus from Chiang Mai. You can catch buses by Greenbus throughout the day, and they take just over 3 hours. From what I’ve looked up now, the tickets on Greenbus are 185 baht, although there are also first-class, second-class and VIP buses running there. These all have air-con and range from 144-288 baht according to Wikitravel. The second class buses are just fine for the duration of the trip. There are two bus stations in Chiang Rai – the “old” and “new”. The old bus station is in the centre of the town and your bus should stop there, although if it doesn’t, there should be a songthaew (minibus thingy) connecting the two terminals, which should pay 15 baht. Sometimes drivers will ask you for more if the bus isn’t full, so it’s up to you whether you wait for it to fill up or pay a little extra to save time.

When we arrived at the bus station, we got on a songthaew to our guest house, the Baan Bua guest house – although it turned out to be just a 5-10 minute walk away. This comes up as Baan Bua homestay on Google maps and is just off Jetyod road, down a side street just opposite (ish) the Dragon’s Breath bar. It’s a nice little place that makes amazingly good toast (with a weird green jam).

Chiang Rai was a nice enough place, although it didn’t seem to have a lot going on. There’s a very nice clock tower, a few good places to eat, and Jetyod road itself has a few decent bars where you can chill out and use free wi-fi. Cat Bar and Dragon’s Breath had friendly staff and the former had board games that you could play, while Coconus made a pretty good roast chicken dinner (yes, I was a bit home-sick).

Chiang Rai has a pretty cool night market, where you can watch dance performances and eat seafood.

The main reason for visiting Chiang Rai was to visit Wat Rong Khun, or the White Temple. It’s easy to get to from Chiang Rai bus station – public buses run all day for 20 baht. For some reason I was feeling like wasting money, so we hired a taxi to take us out there for 300 baht return. The guy was friendly enough and waited until we were ready to be taken back, although he was a cheeky one and tried convincing us to spend crazy amounts of money on getting him to drive us everywhere from that day on.

Wat Rong Khun is a very interesting temple, as Thai temples go, firstly because it isn’t ancient or gold. In fact, it started as a religious art project in 1997 and the temple is still in progress. Tragically, in May this year an earthquake damaged the temple to a degree where the creator, Chalermchai, said that he would destroy it and never rebuild it. However, after moral support from people around the world, he has vowed to restore it to its former glory within two years. At the moment it is not safe enough for people to enter, but they can still take pictures from outside.

We were very lucky, as it was July 2013 when we visited. Entry was free and we were able to take some amazing pictures of this magnificent creation while it was still perfectly intact. The pictures will show you what makes this place so fascinating… 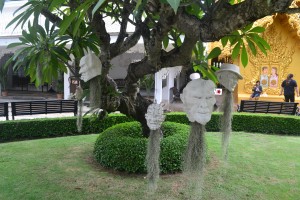 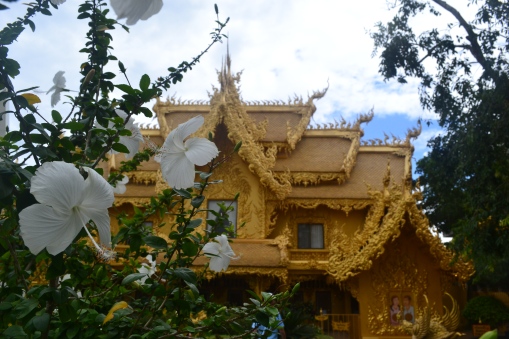 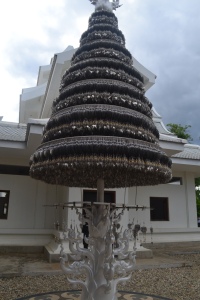 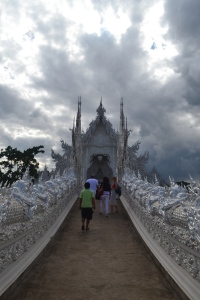 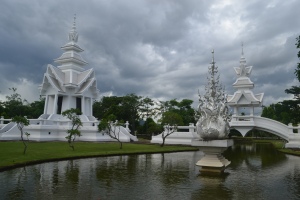 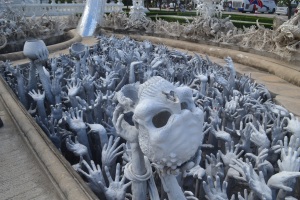 So, if you’re still with me, yes, that’s the Predator. And one more…

Yeah, that’s the kind of place that you just stare at and wonder “damn, is that place real?”