So, here we were, speeding up the Danube at 70km/hr, trying to avoid drunken Smurfs and keep some vague semblance of tidiness to our hair while taking sunset shots from the deck, when Bratislava came into view. Devin castle sat proudly on its hill while twinkling city lights welcoming us into the city, and a boat with a married couple (or a couple in the process of getting married) sailed past, much to the delighted whoops and cheers of the stag parties. Suddenly it seems that everybody is getting married.

The ferry deposited us in a part of town that seemed a little far from our destination (near the central station), so we tried to find maps or signs. Eventually we realised that there were tram lines on the road and followed them until we reached a stop. Fortunately the 17 (I think) was heading to Hlavna Stanica (central station – Slovak is very similar to Czech, but not exactly the same) and there was a ticket machine nearby, identical to the ones in Prague but for the Euro pricetags. We made our slow way to the station in our little red tram and followed the directions that I’d scribbled in my tiny puppy notepad to the hostel.

Fortunately, the Hostel Possonium was easy to find due to its bright lights and signs. We were welcomed by a friendly guy on the 24-hour reception with a guidebook to Bratislava and a welcome shot of some strong Slovakian alcohol. It seemed that the strawberry cocktail from Vienna was still in my blood, and so I was given a delightful buzz that I had not expected. We were directed to our room – the “Spain” room (all the rooms were country themed), a bullfight and stickers for Spain’s islands (Fuerteventura etc) on the walls and lockers completing the image. Much to my dismay, only the top bunks were still free in our 8-bed room. I’m definitely not a fan of top bunks, ever since I rolled over in my sleep at the tender age of 9 – while holidaying in south Wales, as was our annual summer habit – and found myself falling from several feet into the air, onto the ground with a painful thump. Some of my friends will know that I never truly lost my tendency to fall off high places, and this probably common incident has left me with a slight fear of sleeping on the top (unless there’s a very secure barrier there to stop me falling). Since I started staying in hostels, the fear has become more about the ladder slipping as I’m climbing in/out of bed and leaving me hanging stupidly from the top or breaking my legs in some embarrassing fashion. I definitely wasn’t comforted as I put my foot on the first rung of the wooden ladder and the entire bed moved about a foot forward to greet me. To add extra fun, I had to put all the sheets on my bed myself (quilt cover, pillow cases etc), and much to my joy the bed squealed like a distressed pig every time I moved my body in any way.

Ah well, off we went to find some Slovakian food. Two minutes later we came across a Chinese restaurant. It was full of Asian people – when an ethnic restaurant is actually frequented by the people of the country it represents, you know that it has to be good! Our meal came to about 10 EUR each for drinks, soup and tons of amazing duck (and rice, and chicken). I was hungry again an hour later, but that’s the joy and curse of Chinese food. We were tired, and so went back to our hostel to check out the bar/torture chamber. Yes, that’s what it said on the sign. Down the stairs we walked, greeted by this lovely sight…

Quite literally, a bloodbath. Actually, this particular bath had a glass panel over it, and could be used as a table for your Bloody Marys. The entire bar was themed in an ironic horror way, with a poster for Hostel – a film I’m glad to say I’ve never watched, but I believe that it was filmed in Prague and yet said to be set in Bratislava. Obviously, the Slovaks were thrilled with that particular piece of publicity… but it seems that this hostel has taken the motto of “if life gives you lemons, make lemonade”, or something. 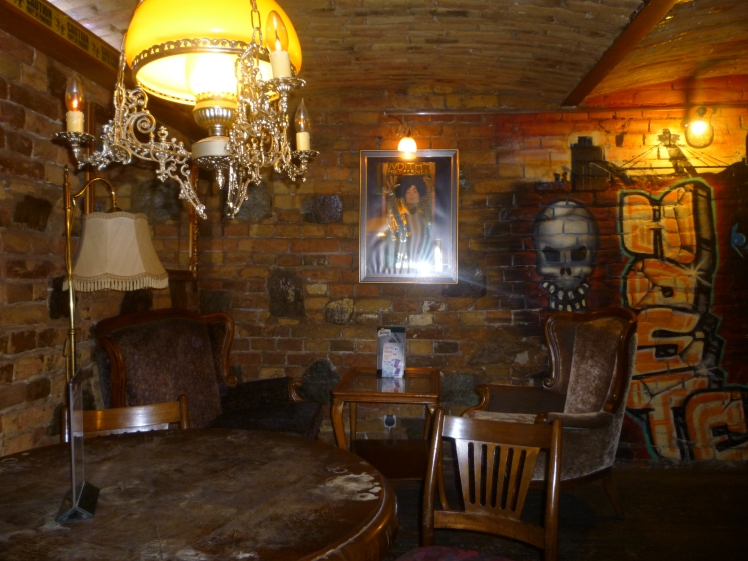 In this quaint setting, we chatted to some Germans and Australians who were all heading to Prague in the next few days. One girl told me about Croatia, and how the water in Hvar was so clear that she could stand her 6’0″ self in the sea and still see her toes clearly. That’s the dream! I cried a little inside because I want to go to Croatia so very badly, if only time and money will let me. Look up its national parks and beaches and you’ll see why.

Anyway, we eventually left our friends to explore “the biggest pub in Europe” (by the way, they said that it was a disappointment) and tried to catch some sleep. Sadly our room was right by the main road, so the roar of traffic and the incessant creaking of my bed made it hard to sleep. To add extra fun, a guy in our room decided that 5.30am was a sociable time to wake up his friend and frantically spend 20 minutes searching around the room for something he’d lost with a very bright little torch. Jeff and I looked at each other from our parallel bunks and shared silent, frustrated looks, before I turned off my 7am alarm and slept until 9.40.

The next morning we headed into Bratislava, and I had one place that I wanted to see. The Blue Church, or its real name – St Elisabeth’s church – is mercifully off the tourist trail, and yet probably the coolest thing I saw in the city. It was built around 1908 – history here – and still operates as a real church today. Apparently in churns out weddings every Saturday, although thankfully this was a Sunday, and instead we were drawn in by the curious sounds of Slovak hymns. The sky was a perfectly clear blue, so it looked almost as if the church was some kind of stone chameleon, trying to hide from tourist groups in the centre. 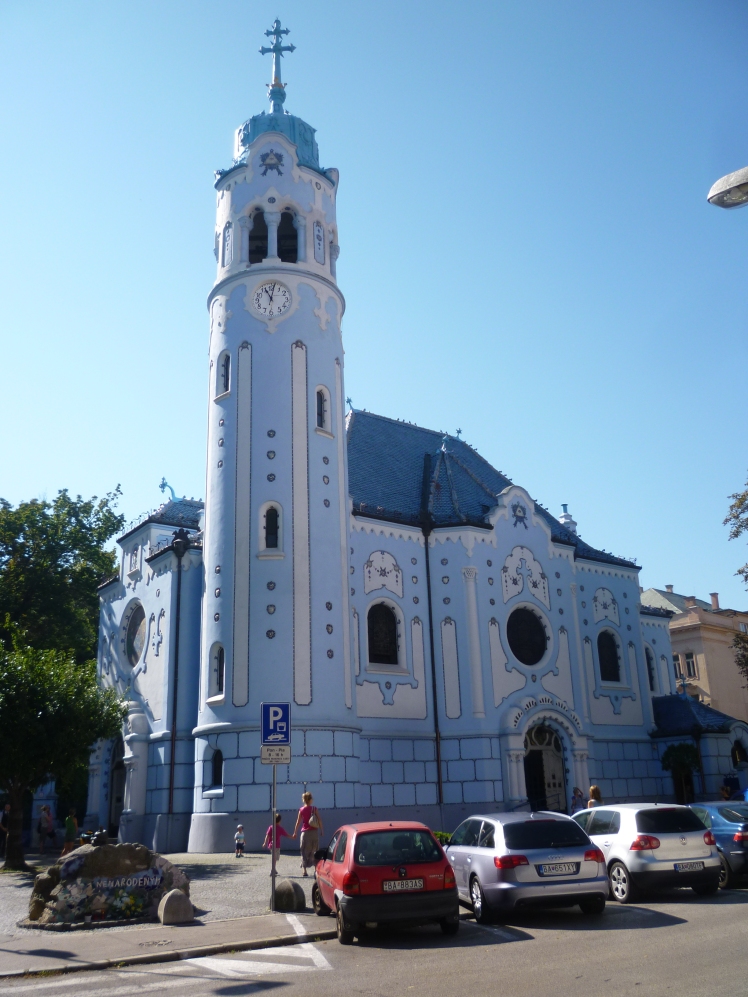 I don’t know, it just looks like a big cake… I love the colour so much that I want to bite it! Ahem. The interior was just as gorgeous, too… I didn’t manage to take a photo as I thought it would be a bit rude to do that during a service. But thanks to search engines… here’s what it looks like inside:

After the church, we walked through the streets to find Bratislava’s castle. It’s up a lot of steps and uphill inclines, so it’s pretty hard to walk up on a hot day, but the view of the Danube and the city, with the sprawling mountains in the background, make it worth it. 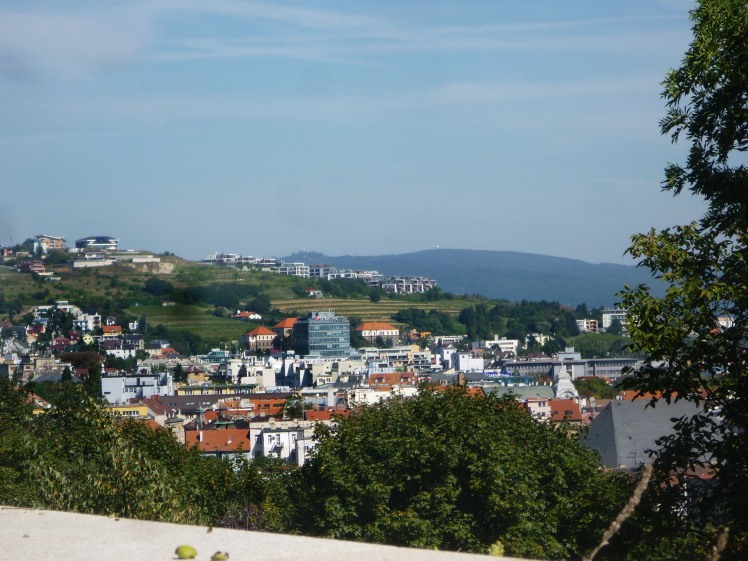 The castle itself is pretty, but there’s nothing to do there. You can’t walk around anything, although there is an exhibition of artifacts that we were too stingy to pay for. Instead, we opted to sit on the terrace of the restaurant nearby, sipping very expensive “homemade” lemonade and enjoying the view. It was then that we decided to catch the 2pm train back to Prague, despite our original plans of staying until 6pm. 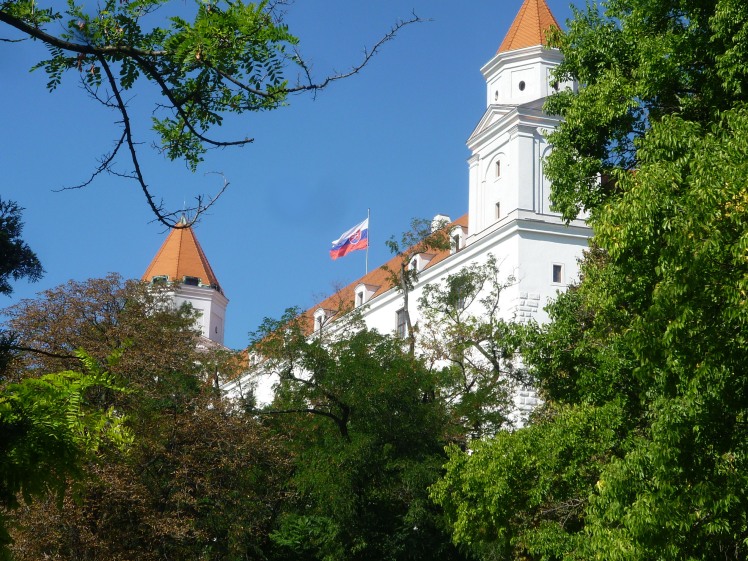 Of course, we had a look through the main town as we left, making sure to catch glimpses of tourist groups and the interesting (and slightly creepy) bronze status that appear everywhere. 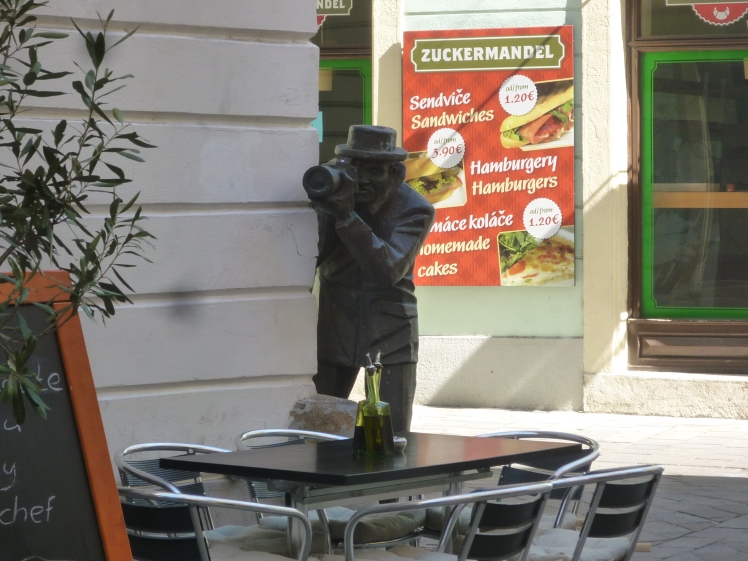 The train back was one of those where you share a cabin with five other people behind a glass door. I thought it was very quaint, and had never seen such a thing before. It brought to mind the Hogwarts Express. Still, as the 4-hour journey continued, I read in Bill Bryson’s Neither Here Nor There about the way that Europe uses these outdated trains and how he felt that he couldn’t breathe without being stared at by strangers. The woman opposite us had a very noisy habit of blowing her nose every five seconds, although this was compensated by the fact that one man sat with us for an hour before we realised that a very cute puppy lived in his bag. We were so distracted that we left the street painting from Vienna on the train, never to be seen again.

We were back in Prague by 6pm. Who says weekends can’t be eventful? Now I just need to find a flight that can give me sufficient time in Croatia…

2 thoughts on “Slovakia: Blue Skies and Churches in Bratislava”