The train from Nha Trang to Ho Chi Minh City takes around 8 hours and was the final leg of our trip down Vietnam. The train was pleasant enough, and I got to stare in awe at the MILLIONS of aloe plants that marked our path through the window…

In case you didn’t know, Ho Chi Minh City used to be called Saigon. South Vietnam was the anti-communist part that the USA joined up with to fight North Vietnam, however in April 1975, Saigon fell to the North and the city was renamed Ho Chi Minh City, although several people still refer to it as Saigon (as you perhaps would, too, if your city had been conquered and renamed?).

We spent our first night at the Marriott, which is clearly not along the “sustainable” or “budget” theme that I like to follow, but we’d been given a voucher from Jeff’s brother as a wedding present so we figured it would be rude not to use it! Besides, we were exhausted, overheated, and don’t forget that we (well, mostly Jeff) were still injured after  the motorbike crash . The Marriott was lovely – we pretty much just ate, drank and slept, while taking in the views…

The first view shows a series of illuminated boats on the river outside, which sadly can’t be shown in their full glory with the camera I used, but they looked like they belonged in Blackpool and you could go for cruises on them. 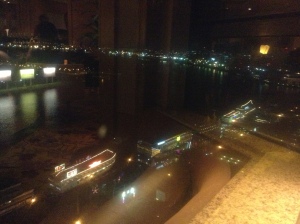 The other view is of the “death tunnel” that lies in the centre of the hotel. Safe!

For our second night, we stayed at the Saigon Mini Hotel 5 (196 Bui Vien street, District 1), which provided us with a decent little room and breakfast. We got from one hotel to the other by taxi (again, trusting the green Mai Linh taxis, although this isn’t always ideal as it was one of them that tried to rip us off in Danang) as it’s pretty cheap to get around that way, plus walking long distances with big backpacks in the heat is ideally kept to a minimum on roads where motorbikes can fly at you out of nowhere.

The Mini Hotel was in a very hectic area. Imagine that you need to walk down the street, only to do so you have to navigate market stalls that jut out onto the road, hoards of people, and the occasional pot hole or crate placed along the way – only once you’re in the road, you have to watch out for motorbikes and cars zooming towards you. There are also plenty of restaurants with outdoor seating along the way. It’s vibrant, for sure, but sometimes it’s a bit much. We ate lunch at one of the restaurants in the area (can’t remember the name, sorry!) and walked over to the Vietnam War Museum.

The War Museum is every bit as uplifting as you’d expect. There are tanks and planes outside, and inside there are three floors of photographs and stories, including a collection of newspaper clippings from the time showing the various anti-war protests that sprung up in countries across the world at the time. There are plenty of horrible pictures from the war, including the one that really kick-started the protests, often known as “napalm girl” (I’ve provided the link for the story and picture) – interestingly, the girl in the picture is now a Canadian citizen! Anyway, there’s also a floor of pictures that show the various deformities that are believed to be the result of Agent Orange, a chemical spray used by the Americans to try damaging the Vietnamese’s crop production but that ended up damaging a lot more than that. Allegedly several US soldiers also suffered as a result of Agent Orange, some having babies with deformities of their own, but the US Military refuses to provide any compensation as it denies that the chemical has anything to do with the defects. Hmm. As you might imagine, the tone plays up the pro-Communist, anti-American angle,with this being in the city that had the Americans on their side and lost, and one can only wonder what the people of South Vietnam really think about the whole thing these days. Anyway…

42,135 (at the last count in 2002, I’m sure it’s higher now) people have been killed by bombs or explosives in Vietnam AFTER the war ended. The scars of war are great… they’re not just in a battle wound, a flashback, a photo on a wall or the memory of a village, but in actual bombs, still as deadly as they were during the war, waiting to destroy.

By the time you reach the models of the cages that the Americans kept some Vietnamese prisoners in, you’ll be about ready to throw yourself off a bridge, as there’s only so many harrowing thoughts you can take in one afternoon. Still, you make yourself look and read, because a holiday to another country should not just be about soaking up the lovely things while ignoring those things that are slightly less pleasant to think about. To really get a feeling for a country’s character, its history, I think you need to think about things like recent wars, even if it puts you out of your comfort zone for a while. In some way, I felt I owed it to Vietnam, as I was using its fuel, eating its food and consuming its clean water, the least I could do was to humbly acknowledge some of its pain, to donate towards the children whose lives are ruined by a conflict they weren’t around for, and to stop and think a little more before I carried on my way.

We needed a drink after all of that, though, and it turns out that Ho Chi Minh City has plenty of microbreweries that are similar to German or Czech beers! Using our trusty map, we found the Gammer Beer restaurant, which made us suddenly feel like we were in Prague again..

After that, we walked towards the Saigon Post Office, which is quite famous because it’s pretty, or something. It used to be a train station, so it’s probably one of the more interesting post offices you’ll visit, if that’s your thing…

As I’ve mentioned before, Vietnam was actually part of French Indochina (from 1887-1949), meaning that as well as a lot of delicious coffee ad baguettes, it has a lot of French architecture. One example of this is Saigon’s Notre Dame Cathedral, which strikes you as another “wait, am I still in South East Asia?” moment.

There are plenty of sights in Saigon, but we decided to slip in to the Lion restaurant for another beer and some food. It was like a massive German beer hall, only we were some of the only customers (there were also some adorable kittens romping around), so a great place to take a big group of people, perhaps.

The city hall, or Ho Chi Minh City People’s Committee building, was all lit up as we walked back to our hotel.