After a long, long overnight train from Danang (which left at 1am the previous night), on which I was rudely awoken at a train station by a woman selling overpriced coffee and bread*, we arrived, bleary-eyed, in Nha Trang.

*I know this probably didn’t require an asterisk, but it would have broken the flow of the sentence. Yes, so, somewhere around 8am a woman woke me up and asked if I wanted coffee. Without having time to process, I nodded. I surveyed my surroundings; I was on the second bunk in a small Vietnamese train, my belongings still strapped with paranoia to my body. I opened my money belt (yep, I wore one of them) and found the smallest denomination I had, which was around 100,000 dong (£3 or so), as well as a second 50,000 note just in case. Coffee is usually about 40p so I wasn’t really convinced I’d need them, but sometimes it’s hard to communicate prices. After the woman had brought me coffee, she started to mime the act of eating. I asked what she had. She then came back with a piece of bread and a box of Laughing Cow cheese and pretty much grabbed the cash from my hand and disappeared. £5+ for coffee and bread in a country where a beer is 25p. Hmmm. The bread was stale and I didn’t feel thrilled about my early morning rip-off, but there we go – I’d probably given her a day’s pay there and then.

Nha Trang is a town on the coast, which – as far as we knew – had little to do apart from chill out by the sea and try some of the microbrews that are made right there. You can tell from Vietnam’s beer that the country has close ties with the Czech Republic – this dates back to the Communist days, and is evidenced by the vast numbers of Vietnamese living in the Czech Republic today. Presumably the art of brewing amazing beer was also involved somewhere in the transaction. 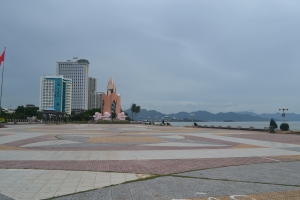 We had booked a hotel on Agoda and made our way over to it – it was within walking distance, around 15 minutes or so. When we arrived at the address, we realised that the hotel had a different name, but we tried our luck anyway. The people at the hotel had never heard of us, or of Agoda. I looked on the website again; the pictures of the reception of the hotel were definitely of the same reception that we were standing in, only with a different name. Using Google Translate, the woman told me “I don’t have your booking”, to which I replied “I think we booked a non-existent hotel”. She smiled and nodded, in that resigned way, and offered us a room for £10 (which is what we’d already paid on Agoda and, incidentally, never got back).

The room was fine, but for our second night we decided to splash out a bit. After walking around a little, we found the Green Hotel, which seems mostly targeted at Russians and cost around £30 for a beautiful room and a very nice buffet breakfast.

I can’t remember much of what we did in Nha Trang; I believe we spent a lot of time walking around and checking things out, before making our way to the beach. There are plenty of nice bars and restaurants along the beach – the Sailing Club seems particularly nice, although quite expensive.

The best place that we went to was the Louisiane Brew House, along the beach (just south of the Sailing Club), where they make between 4 and 6 beers on site. You can chill out by the pool with them or, if you fancy walking a couple of steps further, by the sea. 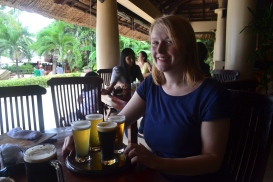 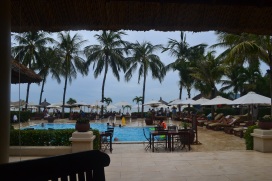 The sea was nice and warm, although poor Jeff couldn’t really enjoy it due to his arm still being in a cast. 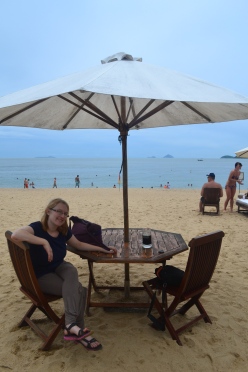 After hanging out on the beach, we made our way in the evening to the Nhat Phong 3 seafood restaurant, which you can walk to or perhaps take a taxi.

We learnt pretty early into our trip that people in South East Asia generally draw and interpret maps in a very different way from the way that we do, and it took me a while to work it out. Basically, they ignore any streets that are not part of the journey, draw in landmarks and completely ignore scale, instead allowing the number of landmarks on a road to determine its length. I grabbed a pen and drew something that looked like a child’s drawing – the river on the right, a road, and a big left turn after crossing the river. Jeff thought I was mad, but lo and behold… the taxi driver got us there with no problems.

Despite its garish, Blackpool-illuminations-esque exterior, Nhat Phong 3 was recommended by Trip Advisor reviewers and can provide you with a LOT of seafood for a pretty decent price. You may need a decoder/Vietnamese person/dictionary to help you, as the menu is full of scary and confusing translations. We ordered what we thought would be safe… tuna in a ginger sauce, prawns with chili and garlic and two crab and sweetcorn soups. The soups turned out to be massive – one bowl was probably enough for four people – and there were a good fifty shrimp on the plate (all still in their shells – work for your food!).

Sadly, it also rained on and off quite a lot during our day in Nha Trang, which may be why I don’t remember much of it. Feeling a bit rough after being locked in a toilet in Danang, being ripped off by a taxi driver and then a woman on the train, finding our hotel didn’t exist and being rained on a lot, we decided to use the $200 Marriott gift card that we’d been kindly given as a wedding present for our day in Ho Chi Minh the next day!