A word on Vietnam’s trains… The Man in Seat Sixty-One has produced a more detailed guide than I could ever hope to do, so always check his site out to see how to get from A to B in Vietnam. There are prices, times, explanations of the different classes of train and even some photos. We took a train from Hanoi to Ninh Binh on our second day there, which took around 4 hours and got us into Ninh Binh around 5pm. We had found a hotel on agoda.com that was very close to the train station, although it took a bit of walking around to find it.

Ninh Binh is the gateway to a lot of beautiful sights, but the town itself is pretty boring – especially after dark. Once we’d checked in, we walked around quite a lot before finding any food or life. The roads were pretty dark and a tiny bit scary, although we walked past a good few cute children who shouted “hello!” at us and seemed quite excited to see a foreigner. Even better – a few homes had their doors open, and were shamelessly singing into karaoke machines in their living rooms. That, or these were some cool little bars that we didn’t dare venture into.

For food in Ninh Binh, find the road that you’d end up on when leaving the train station. There are two or three restaurants with English menus out here, and they make some pretty amazing spring rolls and pho. There’s also this crazy drink – Tra Bi Dao – or winter melon juice. I became quite obsessed with it for a few days, because it tasted amazing. The thrill wore off after a bit, but I’d recommend trying it! 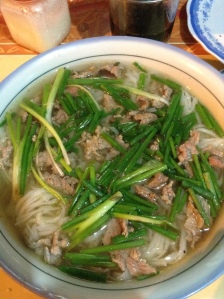 In the daytime, Ninh Binh has a few cafés with free wi-fi, and some bars with cocktails and snacks. It’s a nice place to hang out if you don’t want to be in the middle of tourists, as it’s pretty chilled and friendly.

Various hotels will offer tours of the nearby sights, because that’s what people come to see. We managed to get our own private taxi driver for the day for $33, who was all ours and took us to five sites – these were Trang An, Bich Dong, Tam Coc and… I don’t even know! We just let him drive around and then wait for us while we walked off to take pictures. Sometimes he even got me to call him (the conversation pretty much went “OK?” “OK!”) when we were ready.

As we drove out of the town, we were stunned by the landscape. Massive rocks jut out of the ground in ways you can’t quite believe. The first site he took us to involved some old temples and villages. The area was not signposted very well so we were kind of left to wander around, past strangely decorated cows and accidentally wandering past some people’s homes. It was stunning, anyway… 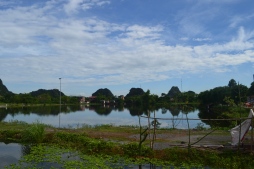 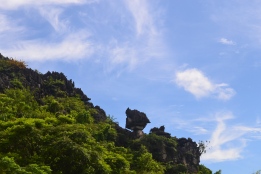 The next place was the Tam Coc caves. A search on Google images will bring up truly stunning shots – go on, try it. The only drawback was that the carpets of rice paddies you see in those pictures are not visible during rainy season (I assume), but it’s still pretty stunning. For the equivalent of £3 you get into a canoe and let a little lady paddle you around. As well as taking in some pretty cool sites, you can sometimes watch her switch to rowing with her feet.

After a while, you’l start heading towards a massive rock. You’ll start to notice a small crack near the bottom, and think “Surely we’re not going in there?” But you are. She’ll suddenly mime that you should duck; duck, sitting in the bottom of the boat, crouching down so that the rock doesn’t scrape your head. You might be asked to grab a torch. There’s no mention of health and safety out here, but check out the views. 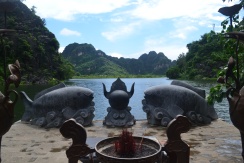 The Trang An caves are more of the same, and to be honest I can’t remember which pictures are from which, but I’ll show you all of them anyway. 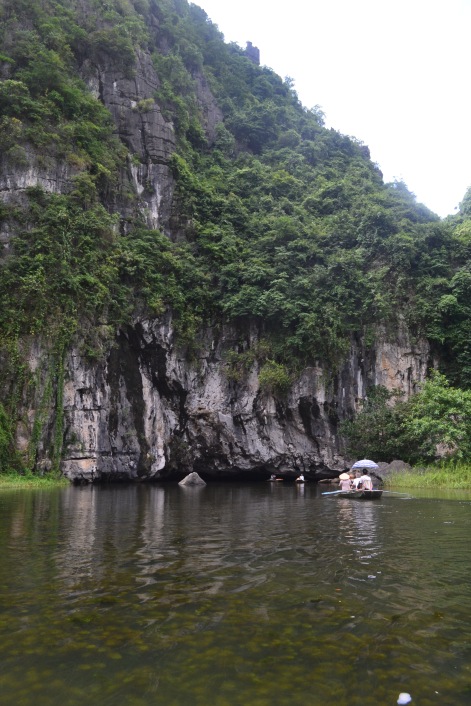 Yep, we’re going in there! 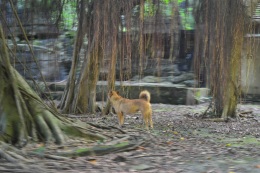 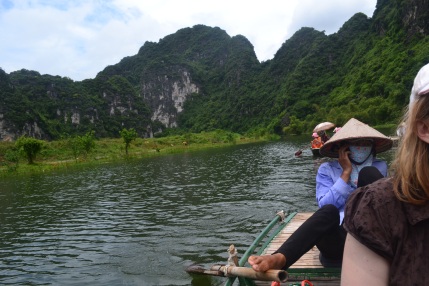 Check out the foot rowing!

Now, a word of warning – at Trang An, after the third cave, you’ll be descended upon by ladies in boats trying to sell you snacks and drinks. If you refuse, they’ll tell you that you should buy something for your rower. The prices here are ridiculously high, and when I offered the rower some of my own drink she declined. The best thing to do here is to give a firm no and wait for your rower to turn you around.

She may then start trying to sell you random bags from a crate in the boat. Ours was quite insistent, so I pretended not to speak English. A bit mean, maybe, but I don’t like being seen as a walking bag of cash. I’ll also tip, unless the person starts demanding “Tip! Tip!” before pulling the boat to shore (which is what happened in Trang An). It can leave a slightly bitter taste in your mouth.

Our taxi driver also took us to a big mountain…

Yep, we walked up there! In the sweltering heat and humidity, it’s quite a challenge. Make sure you have plenty of water. The views were worth it, though..

When we reached the  bottom, our driver and a member of staff fanned us down with tea trays and anything else they could find! It was all rather amusing, and we must have looked like massive, sweaty tomatoes.

He drove around for a bit more, coming up to a pile of gravel in the middle of a tiny road at one point. Instead of finding an alternate route, he somehow drove around/through it.

One of the last places he drove us to was Bich Dong. When we realised that this was to involve another massive walk up a hill, we decided to skip in and just have some delicious lunch at the restaurant outside it. 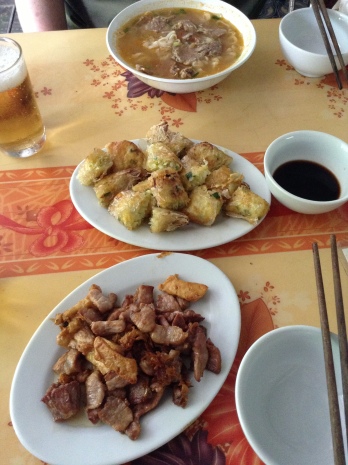 The hotel that organised the trip for us had let us leave our bags with them all day. When we arrived back in Ninh Binh town, we still had a few hours to kill before our 11pm train on to Hue, so we sat in a bar and used their wi-fi for a few long hours!