If you want something a little different, a little outside the centre of Bangkok is the Erawan Museum.

At its heart, the Erawan Museum exists to preserve Thai culture (or so it says on its website). It also acts as a meeting place for the world’s religions; a place of tolerance, perhaps. It is also home to some great views… 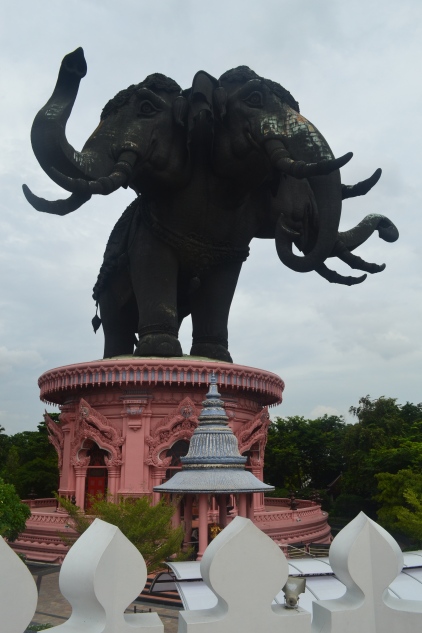 As well as a massive 3-headed elephant, the three floors of the museum, on the inside, represents the levels of life. The first floor, which is down some steps, is meant to represent the underworld – it contains Chinese vases from the Ming and Qinq dynasties and a history of the museum’s construction.

The second floor represents the earth (or human world) houses more antiques and arts including ceramics and European pottery. Each pillar contains ornately carves images depicting each of the world’s major religions.

As well as this, the gardens contain beautiful statues. Take a look… 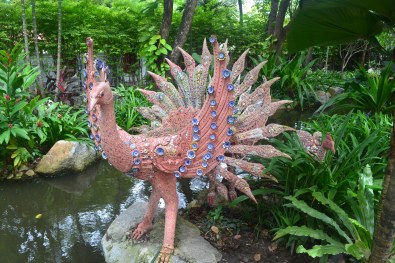 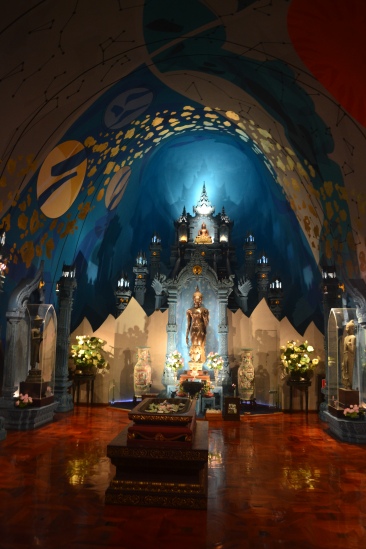 Getting to the Erawan Museum:

To get there, we took the Sky Train all the way to Bearing. From there, you can catch a bus for only 8 baht. Wait for buses at the station outside the sky train exit and have a picture of the three-headed elephant to hand. If you show this to the driver, quizzically, they should be able to nod if they’re going there. The entrance is awkwardly positioned under a motorway bridge and you may get accosted by a lady trying to sell you shrine flowers.

Entrance is 300 baht, which is a little steep for Thailand, but there we go. Of course, there are also drinks, smoothies and plenty of nice food.

Getting back, in theory, should work the same way but we could not find the bus stop on the opposite side of the road, and when we tried waving at passing buses they ignored us. Crossing the street itself is a massive challenge as there’s no crosswalk and traffic doesn’t stop. The easiest thing to do is to get a taxi (one of the official orange, pink or yellow ones) – with the meter on it was 60 baht back to Bearing Sky Train station.

There isn’t a lot more to say – it’s a decent way to spend 3-4 hours if you’re in Bangkok!