We started day 4 with a visit to the Golden Buddha, or Wat Traimit. It’s a 5-10 minute walk from Hua Lamphong, and pretty easy to find if you follow a map. Thanks to Google Street view, you can even see where it is it through this link (just a link to the map, but you can drag the little man in there if you want to plan your route). 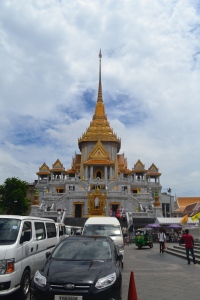 It’s a nice little temple, and – knowledge time – home to the world’s largest solid gold statue. Also, thanks to Wikipedia, I can tell you its official name is  Phra Phuttha Maha Suwan Patimakon, but “Golden Buddha” will do for now. Nobody is sure of when the statue was made (they think around the 13th or 14th century) – but its true gold nature wasn’t discovered until 1955 when it was being transported. Back then, this looked like any old Buddha statue, but somehow the plaster chipped and – lo and behold – they saw the gold that lay underneath. At the time, this was seen as something of a miracle. 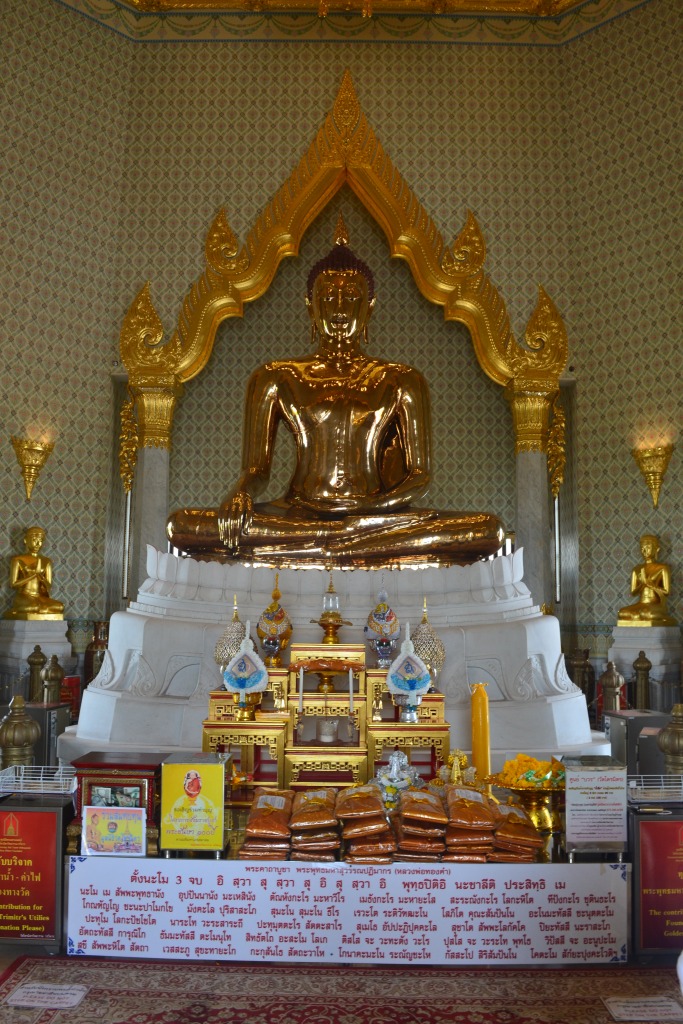 The Golden Buddha is near “Chinatown”, which you’ll mostly find down Yaowarat Road. It’s full of street vendors, Chinese restaurants, gold shops and ladies sitting at tables full of Lottery cards. As with most streets in Bangkok’s busier areas, your options are to chance walking on the road (where you might be able to avoid being hit by motorbikes) or to squeeze through the stalls, brushing past people, avoiding steps, potholes and random items on the ground as you go. These are not streets you can casually “mill” down with a big camera as you’re going to get in everyone’s way (or get pickpocketed, possibly), but at the same time it would seem rude to purposefully push past everyone else. Just go with it and take in the atmosphere… and maybe try a sweetcorn ice cream, like I did. I wouldn’t repeat it – the little bottles of fresh mango, strawberry or pomegranate juice that you can find along the way are far nicer.

I think we took a left down Ratchawong, down to the nearest ferry port. It was quite a walk, but you can then catch the ferry a few stops up – to stop N8 – and take the short walk from there to Wat Pho. Get a map with all the ferry ports highlighted, or you might get lost.

Wat Pho is right next to the Grand Palace. I’m ashamed(ish) to say that we didn’t visit the Grand Palace… it was 500 baht each and when we looked into our hearts we just didn’t really care enough to go and see it. Temples are nice, and everything, but the reason we travel is not to take all the photos you’ll see everywhere else. Of course, we’ll always visit some of the tourist sites, but it takes a lot out of you to dutifully march around the same places as every other tourist, taking the same pictures, if you’re not really that interested – so we didn’t want to overdo it. Also, we were trying to budget around £12 a day each!

I’m not going to paraphrase historical explanations for you, because you’ll be able to find that in all your guide books, as well as the official website of Wat Pho. All I’ll really say is – it’s a nice place to walk around, very impressive temple-ness, more golden Buddhas than you can shake a stick at (although you probably wouldn’t want to do that) and it’s the home of the massive Reclining Buddha which you may have seen in pictures. It’s 100 baht to get in and you get a small bottle of water with your entry, which is always appreciated. Never underestimate how much water you should actually be drinking in hot and humid places. I’ll just be quiet now and show you some pictures (click to enlarge): 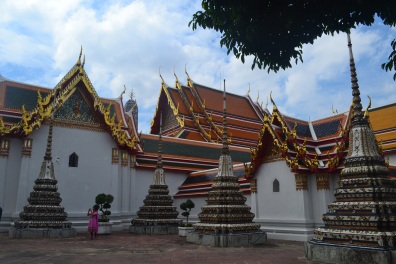 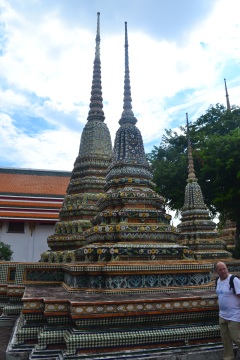 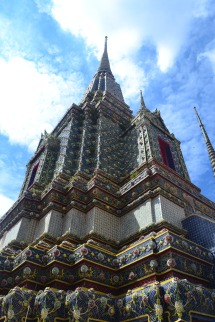 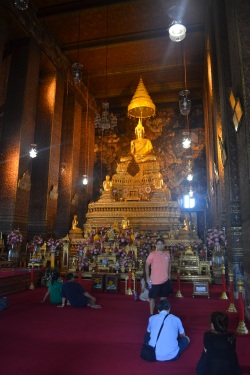 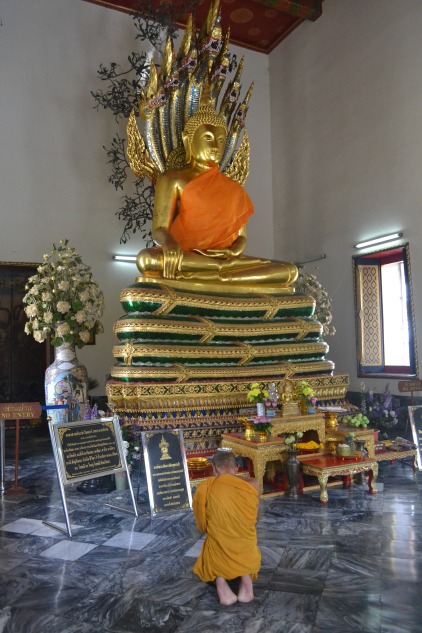 As you step outside Wat Pho onto the main road (Maha Rat) you’ll be greeted by tourist tat a-plenty. A man with a python around his neck leant towards me, offering “snaaaake?” I leapt back with a resounding “no!” and carried on walking. Presumably, if you want to, you can pay some money to touch a snake.

If you turn left from Wat Pho, you’ll be able to find the “Museum Siam” on your left after a couple of blocks. The official location is here (see the map) – it may be a bit tricky to actually spot the entrance, but keep looking for signs for “Museum Siam” and you should see it. The only reason we knew about it was through a Travel app I’d downloaded onto my iPad, which we flicked through while sitting in one of the cooler temple rooms at Wat Pho.

Now, it’s normally 300 baht to get into the museum, but from 4-6pm it’s free. We got in just after 4 so we didn’t need to pay, although I felt a little guilty afterwards. The museum is a good starting point into Thailand, full of videos and exhibitions about their culture and history. You start in a movie room, where you’re introduced to a few “characters” – the same actors portraying modern Thai people and their ancestors – the idea being, I believe, to show the complexity of the “Thai” identity, as they are a large nation made up of several tribes and races. We also learnt that Bangkok was below sea level until the 18th century (and I’ve just learnt that  it is at risk of being under sea again by 2030 due to rising sea levels). The museum also has some fun interactive elements for the kids (including your inner child): 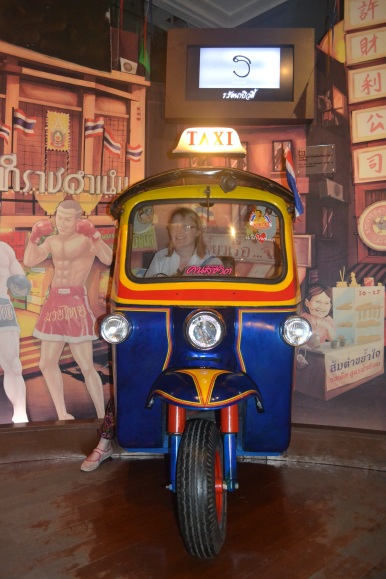 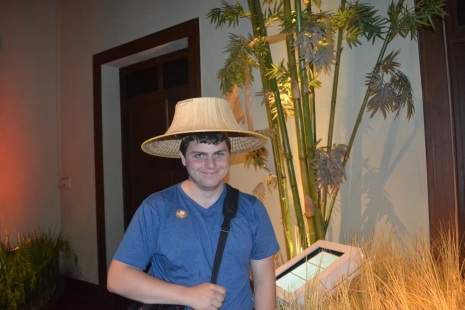 It’s worth a visit, especially if it’s gone 4pm and you’re wondering what to do.

We headed back to Hua Lamphong by walking to the nearest ferry stop again (N8) and taking it down to N12, River City, which is a 20 minute walk to Hua Lamphong. We ate at Laapaak dining, which is a restaurant attached to Hua Lamphong station (although not inside the station or part of it) – near Exit 3 and down a few stairs. It’s a nice restaurant with good prices – around 70 baht (£1.30) for a meal! They had great papaya salad, and as a slightly unusual but delicious drink, try the lime juice. They also do some great coconut ice-cream.