Well, I’ve finally found time to update the blog, and it relates to the one time (two weeks ago) that I actually spent a day just walking around the city and exploring.

The morning started with a hunt for a washing machine, as the one in our rented apartment had decided to break and we were in serious need of some clean clothes. Our TEFL course had given us a list of launderette locations, and so we foolishly set out to follow their directions.

We walked up several stairs, sweating in the heat and feeling anxious, but we never found anything that resembled a laundromat. We sighed, resigned, and walked back home, a backpack full of damp clothes weighing Jeff down (ahem). However, our brief journey was made worth it when we encountered a delightful cat. The friendliest cat I have known, Brambles (as we named him/her) rushed up to greet us, ploughing his little head into our legs and following us up until a large dog scared him away.

Meow! As we said goodbye to Brambles, I glanced up into the trees to see to my delight – red squirrels! The little scamps are practically extinct in the U.K., thanks to the evil tactics of grey squirrels, and so I couldn’t believe my eyes when I saw three or four of them leaping around. I tried to photograph them, but I ended up with red blurs. What I did manage to capture was this beautiful house, which kept very still while I photographed it – for which I am very grateful.

After recovering from walking up and down around 4 times the amount of stairs you see in this picture, I decided to head into the city on my own for the first time, armed with a guidebook and a pocket full of dreams.. or something like that.

I took a tram to Poholec and went to a place called Loreta Square. Loreta, picture below, is a monastery (Loreta).

The bell has been ringing every hour, on the hour, since the 16th century – I think. I was lucky enough to eavesdrop on an English tour guide for a while, and so I learnt a few things about its history. I paid the 60Kc or so to get in and wandered around, looking at amazingly old portraits (some painted 1000 or more years ago). My favourite part was the story of the bearded girl – St Starosta. The story (as learned in my guidebook and from listening to tour groups) is that her father was forcing her to marry somebody against her will, and so she spent a night praying to God for a way out of it. In the morning she awoke with a long, flowing beard. The wedding was called off (oh, shallow men) but her father was so angry that he had her crucified. Where was the NSPCC back then??  She has since become the patron saint of suffering, or something like that. One thing that did shock me as I read the various stories connected to portraits of women was the amount of insane behaviour displayed by men toward women who defied them or refused them in some way. We really had no power or rights, and it does make you realise how much our society has changed in the last few decades alone.

Around the corner from Loreta was the Černín Palace, which today houses the foreign ministry, although it has a rich history, which you can read here because I’m too lazy to pretend I know it. 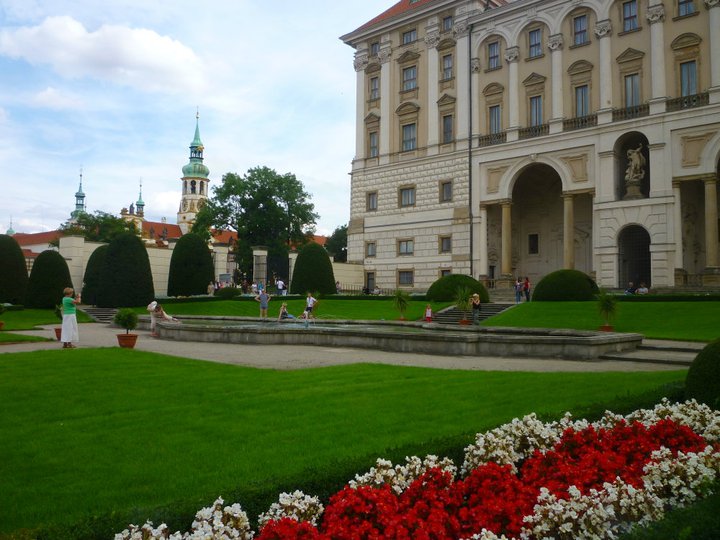 The monastery part apparently took 150 years to build, as it was on the border of Prague and subject to many attacks. Cannonballs are still embedded in the walls today – which is pretty awesome to look at! 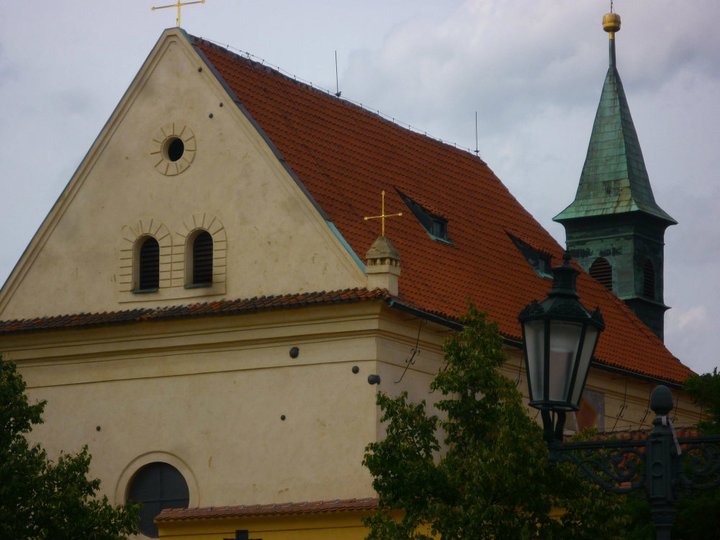 And that’s the thing about Prague. Wherever you go, you are surrounded by history and culture. If stones could talk (and some say that stone can hold memory), Prague would be a cacophony of screaming voices… so, on reflection, it is a good thing that stone doesn’t talk. But between the tour groups and restaurant chains, it is a truly beautiful city.

After walking around and taking in the sights, I stopped at Malý Buddha, a beautiful cafe/restaurant with an Asian hippie vibe. I sat in a candlelit corner surrounded by Chinese fans and dragons, ordered Japanese plum wine and some Thai chicken soup, and felt myself relax. The vibe was calm and it would have felt wrong to speak loudly, as if it might break the spell. On my way out I caught sight of a massive, delicious looking plate of food, and have vowed to go back.

Loreta is near Prague Castle, which is quite high up. So, as I walked back toward the center, I was greeted by a stunning view of the city. 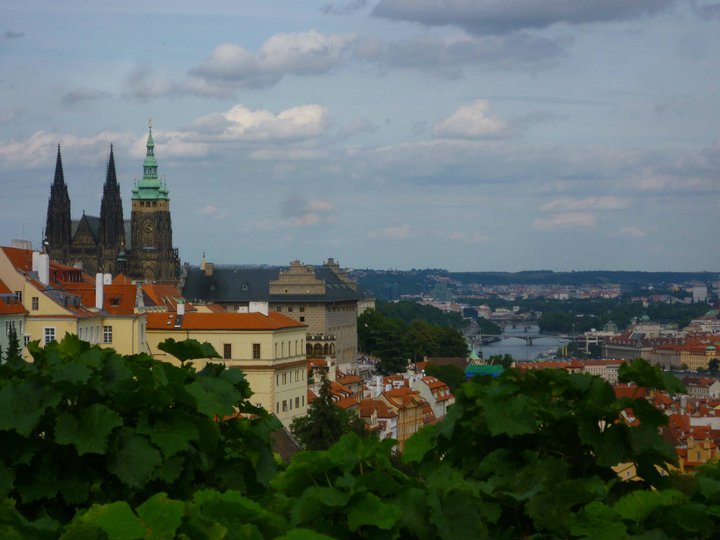 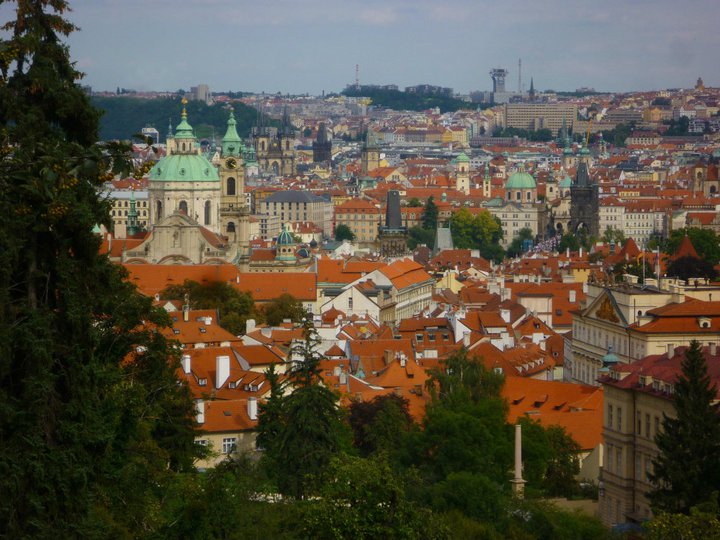 Amazing! OK, so I can see an O2 spire destroying the cityscape if I zoom in, but you can see from these pictures why they sometimes call Prague the “city of 1000 spires”. I walked down, remarking at the pretty restaurants and cafes with outdoor seating that lined the cobbled descent toward Charles Bridge. Everything just looks so quaint, even if it is aimed at tourists. 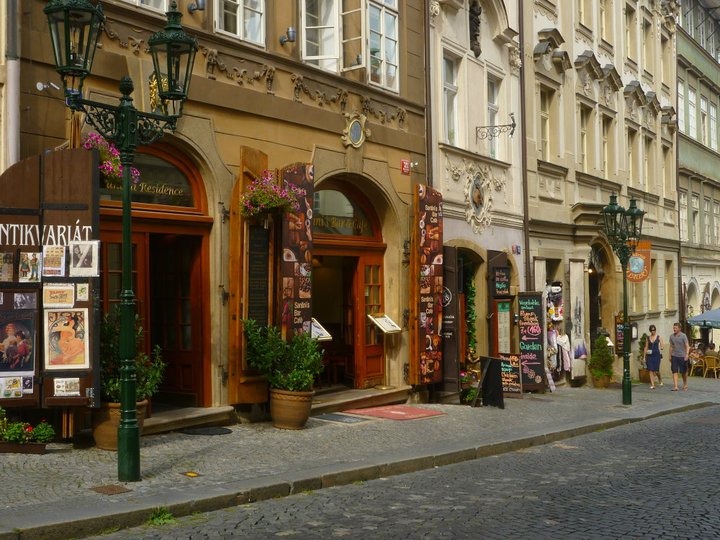 I did decide that I couldn’t face fighting the swarms of tourists (and perhaps pickpockets) on Charles Bridge, so I took a detour and walked across the closest one. This gave me the opportunity to spot a hot air balloon floating around and to take the following wonderful pictures:

You know, I suspect that no matter how many times people  photograph the bridges across the Vltava, they just can’t help themselves from taking another when they walk past.

One thought on “Prague: Walking around Prague – Loreta, Černín Palace and wonderful views”